watch 02:03
Wiki Targeted (Entertainment)
Do you like this video?
Play Sound
The Adventures of Milo and Otis 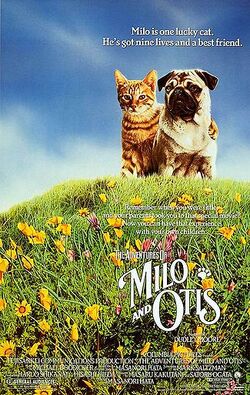 Initially filmed as Koneko Monogatari (子猫物語 A Kitten's Story; alternative English title: The Adventures of Chatran) in Kitakyūshū, Japan, the film was completely revamped, trimmed and westernized with added narration by Dudley Moore. (Shigeru Tsuyuki narrated the Japanese version.) Director Masanori Hata and associate director Kon Ichikawa edited the film together from 400,000 feet of footage, which is roughly 40.3 hours, shot over a period of four years.

The film opens in a barn with a mother cat who has given birth to kittens. One of the kittens is named Milo ("Chatran" in the Japanese version), and has a habit of being too curious and getting himself into trouble. He finds a pug puppy named Otis ("Poosky" in the Japanese version), and they soon become friends. They then look after Gloria's chick, who thinks Otis is his mother. Otis convinces the chick that Otis is not his mother by acting tough on Milo and scaring the Chick. When Milo is playing inside a box floating in the river, he accidentally drifts downstream. Otis runs after Milo. Milo goes on many adventures, escaping one incident after another.

He encounters two bears; escapes from the desolate, raven-infested Deadwood Swamp; steals a muskrat from a fox cache; follows a train-track to the home of a female deer, who shelters him; sleeps in an Owl's "dreaming nest"; stays for a while with a sow pig and her piglets; catches a fish, only to have it stolen by a raccoon; is mobbed by seagulls; and evades the third bear, then a snake, only to fall into a hole.

Otis, for his part, follows Milo throughout, usually only an hour behind and less than a mile out of range. Finally, the two catch up with one another while Milo is in the hole, Otis pulls him out by means of a rope. Milo and Otis are reunited, and soon find mates of their own: Joyce, a cat, for Milo; and Sondra, a pug, for Otis. After this, they separate and raise puppies and kittens. They help each other's families to survive the harsh winter and find their way back together through the forest to their barn, living together.

Retrieved from "https://movies.fandom.com/wiki/The_Adventures_of_Milo_and_Otis?oldid=249830"
Community content is available under CC-BY-SA unless otherwise noted.