Start a Wiki
The Amazing Spider-Man 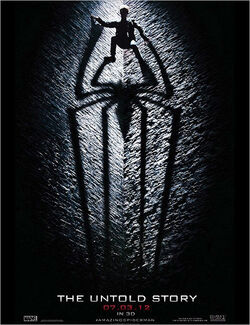 Peter Parker, a teenager who is an outcast from high school and abandoned by his parents when he was young and is now living with his Uncle Ben and Aunt May, spends his days trying to unravel the mystery of his own past and winning the heart of his high school crush, Gwen Stacy. Peter discovers a mysterious briefcase belonging to his dad which leads him to his dad's former partner, Dr. Connors. The discovery of his father's secret will ultimately shape his destiny of becoming "Spider-Man" and bring him face to face with Connors' alter ego, the Lizard.

The Amazing Spider-Man received positive reviews from critics. On Rotten Tomatoes, The film has a score of 73% based on 329 reviews with an average score of 6.65/10.

THE AMAZING SPIDER-MAN 3D - Official Trailer
Add a photo to this gallery
Retrieved from "https://movies.fandom.com/wiki/The_Amazing_Spider-Man?oldid=213174"
Community content is available under CC-BY-SA unless otherwise noted.