watch 00:59
The Loop (Movies)
Do you like this video?
The Art of Racing in the Rain 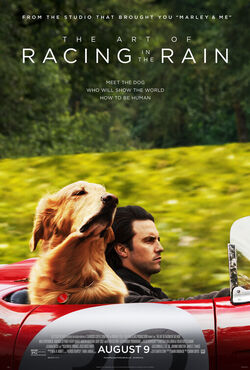 The Art of Racing in the Rain is a 2019 American comedy-drama film directed by Simon Curtis. The cast of the film consists of Milo Ventimiglia, Amanda Seyfried, Kathy Baker, Martin Donovan, Gary Cole, and Kevin Costner.

The film was released in the United States on August 9, 2019 by Walt Disney Studios Motion Pictures.

Enzo (voiced by Kevin Costner), a dog owned by Denny (Milo Ventimiglia) and Eve Swift (Amanda Seyfried), reflects in this film about his relationship with his human family and being around in times of need. He is already dying but he believes that a dog who is prepared with life experiences will become human once reborn.[3] He then narrates his story and the lessons he learned from his humans, with whom he has stayed for a decade. He begins with his first meeting with Denny as a puppy and then describes his life's complications like competing for Denny's love when he marries Eve and when the couple's daughter is born. Enzo also watches Denny and learns from his actions.

Retrieved from "https://movies.fandom.com/wiki/The_Art_of_Racing_in_the_Rain?oldid=177528"
Community content is available under CC-BY-SA unless otherwise noted.