View src
watch 01:33
Wiki Targeted (Entertainment)
Do you like this video?
Play Sound
The Artist 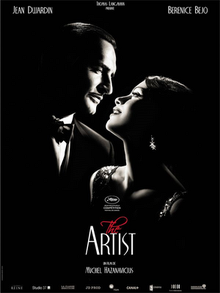 The Artist is a melodramatic silent French film that was released on October 12, 2011. Directed by Michel Hazanavicius, the story takes place in Hollywood from 1927 to 1932, featuring Jean Dujardin as a silent movie star who must come to terms with the arrival of "talking pictures". As his career declines, he meets a young actress played by Bérénice Bejo, whose career is on the rise. The Artist, a silent film itself, is set to become the most watched silent film in decades now that it has been nominated for several awards. Jean Dujardin already won the Best Actor Award at the 2011 Cannes Film Festival, where the The Artist premiered.

In the 1920s, actor George Valentin (Jean Dujardin) is a bona fide matinee idol with many adoring fans. While working on his latest film, George finds himself falling in love with an ingenue named Peppy Miller (Bérénice Bejo) and, what's more, it seems Peppy feels the same way. But George is reluctant to cheat on his wife with the beautiful young actress. The growing popularity of sound in movies further separates the potential lovers, as George's career begins to fade while Peppy's star rises.

Dujardin won the Cannes Film Festival's Best Actor Award for his performance. The dog actor in the film, Uggy, won the Palm Dog Award for best performance by a canine at the festival.