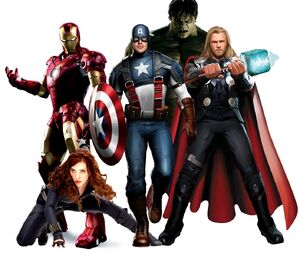 The Avengers are a team of superheroes composed of Captain America, Iron Man, Thor, Hulk, Black Widow, and Hawkeye under the Avengers Initiative from S.H.I.E.L.D. led by Nick Fury. The Avengers film is a crossover of all the films independently produced by Marvel Studios set within the Marvel Cinematic Universe, namely Iron Man, The Incredible Hulk (2008), Iron Man 2 2010, Thor and Captain America: The First Avenger

Retrieved from "https://movies.fandom.com/wiki/The_Avengers_(team)?oldid=159378"
Community content is available under CC-BY-SA unless otherwise noted.