watch 02:03
Wiki Targeted (Entertainment)
Do you like this video?
Play Sound
The Being 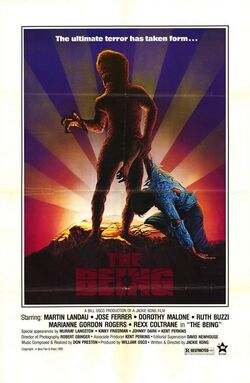 The Being is a 1983 horror film written and directed by Jackie Kong and starring Martin Landau, José Ferrer, Dorothy Malone, Ruth Buzzi, Marianne Gordon and exploitation film producer Bill Osco, who is billed as "Rexx Coltrane". It focuses on a detective who is trying to solve a string of grisly murders and disappearances. It was the first film directed by Kong, who went on to direct several other films of the same type, including Blood Diner, which has become a cult favorite.

Toxic waste dumping in a small Idaho town turns a young boy into horrible mutant monster. The town's police chief and a government scientist team up to stop the monster, which is quickly killing off the town's citizenry.

The Being is notable as the first film made by schlock horror film writer and director Jackie Kong. Filming began in 1980 under the title "Easter Sunday", before being put on the shelf for three years before finally being released on November 18, 1983 with the tagline "The Ultimate Terror has Taken Form".

The film has been met with negative reviews. On the review website Rotten Tomatoes it has had few but mostly negative reviews. Scott Weinberg from DVDTalk.com was among the film's detractors calling the film "Grungy, muddy-looking" he also called it a "blatant Alien ripoff". J. Read from monstersatplay.com called it "cheap, rushed, and an incongruous mess" stating it as a perfect example of all the bad movies that came out in the 1980s. Allmovie.com calls the film "abysmal", with "clumsy, ham-fisted" direction, effects that are at times "goofy", and a "leaden, noncharismatic" performance from lead actor and producer Bill Osco. Nevertheless, the reviewer calls it "worthy of note for cinematic trash-fiends", because of its cast, flashes of humor and "oddball qualities".

The Being was released on DVD on September 13, 2005 by Shriek Show in widescreen format with no special features. Shriek Show released it again on July 31, 2007 as a part its Mutant Monsters Triple Feature which combined it with The Dark and Creatures From The Abyss.

Retrieved from "https://movies.fandom.com/wiki/The_Being?oldid=70731"
Community content is available under CC-BY-SA unless otherwise noted.