Start a Wiki
The Big Lebowski 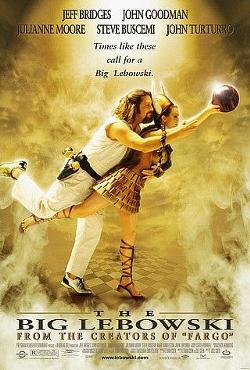 The Big Lebowski is a 1998 black comedy crime film written by Joel and Ethan Coen and directed by Joel Coen, chronicles a few days in the life of a burned-out, unemployed California slacker after he is mistaken for a millionaire with the same name. While not directly based on Raymond Chandler's novel The Big Sleep, Joel Coen has said that "[we] wanted to do a Chandler kind of story—how it moves episodically, and deals with the characters trying to unravel a mystery. As well as having a hopelessly complex plot that's ultimately unimportant."

The film, known for its idiosyncratic characters, surreal dream sequences, unconventional dialogue and eclectic soundtrack, has become a cult classic and has been called "the first cult film of the Internet era."

Two thugs surprise Jeffrey "The Dude" Lebowski (Jeff Bridges) in his home in Venice, California, attempting to collect a debt Lebowski's supposed wife owes to Jackie Treehorn (Ben Gazzara). After the thugs rough up the Dude and urinate on his rug, the Dude points out that they're looking for a different person of the same name. The next day, the Dude seeks compensation for his rug from the other Jeffrey Lebowski, the titular "Big" Lebowski, a wheelchair-bound millionaire, who gruffly refuses. After craftily stealing one of the Big Lebowski's rugs, the Dude meets Bunny Lebowski (Tara Reid), the Big Lebowski's nymphomaniacal trophy wife on his way off the property.

Days later, the Big Lebowski contacts the Dude, revealing that Bunny has been kidnapped and asks him to act as a courier for the million-dollar ransom, the Dude being in the unique position of being able to identify the rug-soiling thugs, the suspected kidnappers. Back at his apartment, the Dude naps on his new, stolen rug, only to have his apartment burgled again, the criminals knocking him unconscious. Following a musical dream sequence, the Dude wakes up on his bare wooden floor, his new rug missing. Soon after, when Bunny's kidnappers call to arrange the ransom exchange, Walter Sobchak (John Goodman), the Dude's unstable bowling teammate, convinces the Dude to keep the money and gives the kidnappers a "ringer" suitcase filled with dirty underwear. The exchange is bungled however and the kidnappers escape. Later that night, the Dude's car is stolen, along with the briefcase filled with money. The Dude receives a message from the Big Lebowski's daughter, Maude (Julianne Moore), who admits to stealing the Dude's rug, which he stole from the "Big" Lebowski's home. At her art studio, she explains that Bunny is a pornographic actress working under producer Jackie Treehorn and confirms the Dude's suspicion that Bunny probably kidnapped herself, identifying her likely accomplices as a trio of German nihilists led by Uli Kunkel (Peter Stormare), a pornographic actor who has worked with Bunny. She asks the Dude to recover the ransom, as it was illegally withdrawn by her father from a family-run charitable foundation for orphans, offering him a finder's fee in exchange for his services.

The Dude is enjoying a relaxing bath when he receives a message that his car has been found. Mid-message, the three German nihilists invade The Dude's apartment, interrogating him for the ransom money. After they leave, amidst ominous warnings, the Dude retrieves his car but finds the briefcase missing. Based on evidence in the back seat of his car, the Dude and Walter track down the likely thief, a teenager living at home, but fail to find the briefcase of money during his interrogation. Upon returning home, Jackie Treehorn's thugs return to bring The Dude to Treehorn's beach house, where Treehorn inquires about the whereabouts of Bunny. When the Dude confesses he has no such information, Treehorn drugs The Dude's drink and he passes out, leading to a second, more elaborate dream sequence, "Gutterballs." Upon awakening once again, the Dude arrives home and is greeted by Maude Lebowski, who hopes to conceive a child with him. During post-coital conversation with Maude, The Dude finds out that, despite appearances, her father has no money of his own, as Maude's late mother was the rich one, and she left her money exclusively to the family charity. In a flash, The Dude unravels the whole scheme: When the Big Lebowski heard that Bunny was kidnapped, he used it as a pretense for an embezzlement scheme, in which he withdrew the ransom money from the family charity, kept it for himself, gave an empty briefcase to The Dude (who would be the fall guy on whom he pinned the theft), and was content to let the kidnappers kill Bunny.

Meanwhile, it has by now become clear that the kidnapping was itself a ruse. While Bunny took an unannounced trip, the nihilists (her friends), alleged a kidnapping in order to get money from her husband. (It is left unclear whether and to what extent Bunny was an active collaborator in this scheme). The Dude and Walter arrive at the Big Lebowski residence, finding Bunny back at home, having returned from her trip. They confront the Big Lebowski with their version of the events, which he counters but does not deny. The affair apparently over, the Dude and his bowling teammates are once again confronted by the nihilists, who have set The Dude's car on fire. They are still demanding the million dollars, despite the fact that The Dude does not have the money and Bunny has not even been kidnapped. Walter fights them off, but their third teammate, Donny (Steve Buscemi), suffers a fatal heart attack. Donny's funeral. GonkAdded by Gonk

They take his ashes to a beach, where Walter offers a eulogy interspersed with irrelevant Vietnam War references. He scatters Donny's ashes, but a gust of wind blows much of the ashes onto The Dude's face. Upset, The Dude lashes out at Walter. Walter apologizes and hugs The Dude, before suggesting "Fuck it, man. Let's go bowling." As the movie nears its end, The Dude sums up his situation and philosophy with the phrase, "The Dude abides."

The Big Lebowski was written around the same time as Barton Fink but when the Coens wanted to make it, John Goodman was taping episodes for the Roseanne television program and Jeff Bridges was making the Walter Hill film, Wild Bill and they decided to make Fargo in the meantime. According to Ethan, "the movie was conceived as pivoting around that relationship between the Dude and Walter" which sprang from the scenes between Barton Fink and Charlie Meadows in Barton Fink. When they started writing the script, the Coens only wrote 40 pages and then let it sit for a while before finishing it. This is the normal writing process for the Coens because they often "encounter a problem at a certain stage, we pass to another project, then we come back to the first script. That way we've already accumulated pieces for several future movies."

Retrieved from "https://movies.fandom.com/wiki/The_Big_Lebowski?oldid=179452"
Community content is available under CC-BY-SA unless otherwise noted.