Start a Wiki
The Birds 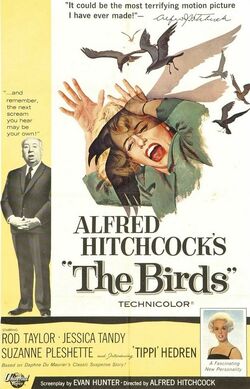 The Birds is a 1963 American horror film directed by Alfred Hitchcock, loosely based on the 1952 story of the same name by Daphne du Maurier. It stars Rod Taylor and Tippi Hedren, in her screen debut, supported by Jessica Tandy, Suzanne Pleshette and Veronica Cartwright.

Melanie Daniels (Tippi Hedren) is a rich society girl, who meets handsome Mitch Brenner (Rod Taylor) at a pet store. After he leaves, she decides to follow him with two lovebirds, a present for his baby sister (Veronica Cartwright). Shortly after she arrives at Mitch's quiet hometown of Bodega Bay, strange things seem to happen to the local birds - causing them to attack without provocation.

The Birds received critical acclaim. In recent years it has received a Rotten Tomatoes approval rating of 96%, with the consensus: "Proving once again that build-up is the key to suspense, Hitchcock successfully turned birds into some of the most terrifying villains in horror history." The eminent film critic David Thomson refers to it as Hitchcock's "last unflawed film".

Retrieved from "https://movies.fandom.com/wiki/The_Birds?oldid=109114"
Community content is available under CC-BY-SA unless otherwise noted.