View src
watch 01:33
Wiki Targeted (Entertainment)
Do you like this video?
Play Sound
The Bodyguard 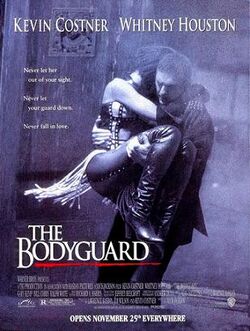 The Bodyguard is a 1992 American romantic thriller film starring Kevin Costner and Whitney Houston, and directed by Mick Jackson. Houston, in her acting debut, portrays a character mirroring her own, a successful music star who has received an Oscar nomination for a movie role. Costner portrays a highly sought-after bodyguard who is a former Secret Service Agent, hired to protect Houston's character from an unknown stalker. Lawrence Kasdan wrote the film in the 1970s, originally as a vehicle for Steve McQueen and Diana Ross.[1]

As a tribute to the passing of Whitney Houston, the film re-released nationwide for 1 day only on March 28, 2012.

Whitney Houston plays Rachel Marron, an Oscar-nominated music superstar who is receiving death threats from a stalker. Kevin Costner plays Frank Farmer, a former Special Agent in the United States Secret Service who was a member of the presidential protection detail during the presidencies of Ronald Reagan and Jimmy Carter. Farmer continues to be troubled by the fact that he was off duty at the time of John Hinckley's attempted assassination of Reagan. He is now a successful professional bodyguard who primarily protects corporate VIPs. Farmer is hired by Bill Devaney (Rachel's manager), to protect her after several death threats are made against her and a small bomb explodes in her dressing room.

Rachel's singing career and family life are highlighted in the film, and Frank is reluctant to accept the job after Rachel comes across as a spoiled diva who is oblivious to the serious nature of the threats against her life. Rachel's "handlers" had kept the bomb in the dressing room secret from her, and at first, she sees Frank as paranoid and views his protection techniques as overly intrusive. Tony, Rachel's original hired bodyguard clearly resents Frank's presence and views it as a slight on his ability to protect her. At a concert where Rachel is performing, a riot breaks out and Frank successfully protects her from danger; this incident results in Rachel falling in love with Frank. Initially, he attempts to keep the relationship professional, but the two end up sleeping together. Frank immediately recognizes the mistake, and breaks off the affair knowing that their relationship may compromise his ability to keep her safe. Rachel, hurt by this seemingly heartless act, begins to ignore Frank's protective advisories and purposely violates the security routines he has put into effect. She then attempts to make him jealous by trying to seduce his former Secret Service co-worker, Greg Portman. After she has a frightening personal encounter with her stalker via a troubling phone call, Rachel realizes that she must put her trust in Frank ahead of her broken heart and desire for success. Finally recognizing the severity of the situation, she cancels the rest of her tour.

Frank and Rachel then travel to Frank's father's home, which is a large log cabin in the mountains by a lake. Along for the ride are Rachel's driver Henry, her son Fletcher, and her sister Nicki. Frank's father Herbert, a semi-retired attorney, welcomes the group to his home. Nicki attempts to seduce Frank at the mountain retreat, and becomes angered when her advances are refused. Rachel's son is almost killed the next day when a bomb explodes inside the boat he had been riding in moments before. Unfamiliar footprints are found around the cabin, and after they discover the automobiles have also been sabotaged, they realize Rachel's stalker has followed them.

Frank goes into lock-down mode for the night, and the group makes a plan to leave in the morning. Rachel's sister Nicki gets drunk and reveals that the obsessive stalker is not the person trying to kill her. She confesses that in a drug-induced jealous fit she hired a hitman to kill Rachel, however, she cannot call it off because she does not know the killer's identity.

The hitman breaks into the house and fatally shoots Nicki as she tries to stop him, before then escaping. Frank first ensures that his father, who is armed with a large caliber revolver, has the rest of the group secured on the second floor, then pursues the killer into the woods. Frank shoots somewhat blindly at the hitman, but the hitman escapes through the dark woods. The next day, Frank learns that his Secret Service colleagues had apprehended the stalker and were interviewing him when the encounter with the hitman occurred and Nicki was killed.

After Nicki's funeral a few days later, Rachel attends the 67th annual Academy Awards, where she has been nominated for best actress. As Rachel is accepting the award for Best Actress, the assassin attempts to murder her again with a gun he has skillfully hidden inside a video camera. Frank leaps in front of the bullet to save her life, and is shot himself. He then fires a round through the camera lens manned by the hitman before losing consciousness, injuring the eye of the killer, who is revealed to be Greg Portman (Frank's former Secret Service co-worker). Portman gouges out Tony's eye during the ensuing struggle, but both Tony and Frank survive their injuries.

The film ends as Frank is seeing Rachel off at the airport, with his arm in a sling from the bullet he took to save her life. Frank has arranged for another protection detail to assist Tony, who is back on the job wearing a black eye patch. Frank's contract having been fulfilled by his successful protection of Rachel, they part with a kiss and he moves on to his next assignment, guarding a Priest.

In 2011, Warner Bros. announced plans for a remake that will update the story in order to reflect the modern world of the Internet. This new version will incorporate the use of such sites such as Twitter, Facebook, Google Maps and countless other sites which make gaining access to celebrities much easier than ever before. The remake will be penned by Jeremiah Friedman and Nick Palmer.[4]

Singer Rihanna was once sought after to play the role of Rachel, but on March 10, 2011, Rihanna herself ruled out playing the part stating: "Absolutely not. I hate it when singers do singing movies all the time, because you can never look at them as anybody else. I want to play a character. My whole life is playing Rihanna; being a singer won't be a stretch for me."[5]