Start a Wiki
watch 16:45
The Loop (Movies)
Do you like this video?
The Book of Life 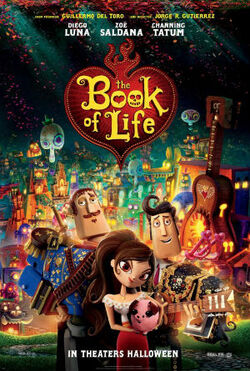 The Book of Life (2014) is an American 3D computer-animated adventure comedy stars the voices of Diego Luna, Zoe Saldana, Channing Tatum, Christina Applegate, Ice Cube, Ron Perlman, Cheech Marin, Plácido Domingo, Gabriel Iglesias, and Danny Trejo. Produced by Reel FX Creative Studios and distributed by 20th Century Fox, the film is directed by Jorge Gutierrez, and co-written by Gutierrez and Doug Langdale. The Book of Life is currently scheduled to be released in the United States on October 17, 2014.

Manolo, a young man who is torn between fulfilling the expectations of his family and following his heart, embarks on an adventure that spans three fantastic worlds where he must face his greatest fears.[1]

A bus full of children arrives at a museum, where they are taken on a secret tour by a guide named Mary Beth, who tells them about the famous legends and myths of Mexican folklore. After charming her way past an old security guard, she leads them to a hidden room, containing the Book of Life, which holds the story of how the ways of their world were shaped. She shows them one of the stories, opening a box containing dolls that represent the characters in the tale.

The story focuses on the Mexican town of San Angel, and on two gods, La Muerte, ruler of the Land of the Remembered, where the spirits live on with their memories kept by their loved ones; and Xibalba, ruler of the Land of the Forgotten, where the forgotten souls decay into oblivion. During the Day of the Dead festival, the two spot three young children playing - Manolo and Joaquín, who are both in love with the same, free-spirited girl, María. Manolo comes from a family of bullfighters, but his real passion lies in music. Joaquín is more adventurous, hoping to avenge his father, a soldier who was killed by the sinister bandit Chakal.

Disguised as peasants, the two go down into the celebration. La Muerte, as an old woman, comes to Manolo and his father, Carlos, who are at the grave of Manolo's mother, Carmen, and is given a loaf of bred by Manolo. Xibalba, as an old man, asks Joaquín for some bread, but he is more hesitant. Xibalba trades the bread for a mystical medal that will make Joaquín invulnerable to harm. Xibalba then bets La Muerte that María will end up marrying Joaquín, while La Muerte bets on Manolo. The winner will be allowed to rule over the Land of the Remembered.

María later sets free a group of animals into the town after seeing a cute baby pig and fearing that he would be killed by the butcher, to the chagrin of her father General Posada. A wild boar comes into town and nearly gets Posada, but Manolo manages to lure the boar like a bullfighter and cause it to crash, but Posada believes it was Joaquín that saved him, ignoring Manolo in favor of him. As punishment for her actions, Posada orders María to be sent to a private boarding school. Manolo gives her the baby pig that she wanted to save, which Manolo names Chuy. María gives him a guitar after his old one is broken. On it is an engraving that says "Always play from your heart."

Over the years, Manolo is trained by his father into becoming a skilled bullfighter, while Joaquín, with the help of the of the magic medal, manages to conquer many enemies and become the town hero. On the day of María's return, a celebration is held in town. Manolo and Joaquín see her and are captivated by her beauty. Manolo is set to fight a bull, but he has qualms over killing it. Although he is able to make it crash into the wall, he refuses to kill it, causing the audience to boo him, but María applauds him for his compassion.

During a party for María, Joaquín suggests that María ought to be with him so that he can make her happy, causing María to be angry and leave. Meanwhile, Manolo gets his Mariachi band friends, the Rodriguez brothers to help serenade her, but when it doesn't go over well, Manolo serenades her with a song from his heart, which even moves all the townspeople. Joaquín later proposes to María, saying that their marriage would keep Joaquín in San Angel, and make it safe from Chakal and his bandits. Manolo arrives and fights with Joaquín over María, then later tells María to meet him at dawn.

Fearing he will lose the wager, Xibalba turns his staff into a snake and sends it after Manolo. María follows a trail of candles to a tree outside town where Manolo professes his love to her, which she reciprocates. Then, the snake slithers into the area. María pushes Manolo out of the way, getting bitten by the snake, dying instantly. Manolo carries María's body back to San Angel, where both Joaquín and General Posada blame him for María's death. While mourning María, Xibalba appears before him, and Manolo states that he will do anything to be with María again. Xibalba uses his staff to form a two-headed snake, which bites Manolo and kills him.

Manolo's spirit goes down to the Land of the Remembered, where he meets his ancestors, including his mother. With the help of his family, Manolo goes to La Muerte's castle, which is now run by Xibalba, due to Manolo dying. He explains that the snake bite only put María to sleep, and Joaquín revived her with the pin. Manolo vows to expose Xialba's treachery and return to the land of the living.

Manolo, along with Carmen, and his grandfather, Luis are told to travel to the Cave of Souls to make it to the Land of the Forgotten and meet with La Muerte. There, Manolo is thrown into a labyrinth, which he manages to get through. The cave guardian takes a gigantic form and swings down a huge sword onto Manolo, which shatters upon hitting him, due to his pure heart, causing the guardian to allow them entry.

In the cave, they meet the Candle Maker, who oversees the lives of everybody in the living world. Manolo convinces him to take him through to the Land of the Forgotten to meet La Muerte. The Candle Maker agrees after seeing that Manolo's story in the Book of Life has yet to be written, because he is writing it himself. Making it to La Muerte, she grows angry when informed of Xibalba's cheating, angrily chastising him for betraying her again. Manolo then offers a wager himself. If he wins, Xibalba must let him return to the human world, and La Muerte adds that he may never interfere with the affairs of the living ever again. Otherwise, Xibalba may rule over both realms.

In the living world, the bandit Chakal and his army are making their way to San Angel, after hearing that Joaquín has the mystic medal, which formerly belonged to Chakal. As they approach the town, Carlos tries to hold them off, only to be killed. His spirit joins the family as they watch Manolo's challenge, where he must face off against every bull that his family has ever fought, forming into one giant bull. However, instead of killing it, Manolo sings it a song, apologizing for all the wrongs his family has brought to the bulls, causing it to dissolve away, now at peace. La Muerte, the Candle Maker, and Xibalba, impressed by Manolo, grant him his life back and send him to the living world just in time to fight back.

María manages to rally the town to fight back, and the three gods also decide to aid Manolo by summoning his family's spirits to fight back against Chakal. Manolo and Joaquín make amends and decide to fight against Chakal together. During the fight, Chakal grabs María and climbs the top of a tower. With the help of his family, including a now proud Carlos, Manolo is sent up to the tower to face off Chakal. With María, they fight the bandit and knock him off the tower. Chakal then lights up the bombs on his belt to take the whole town down with him. Manolo and Joaquín push Chakal beneath a bell and tie him up. However, Manolo pushes Joaquín out of the way as he knocks over a column, causing the bell to fall on him and Chakal, seemingly kiling them both. However, Manolo emerges safely, as Joaquín had secretly given him the magic medal.

General Posada gives Manolo his blessing to marry María. The two are wed, with Manolo's family proud of their boy. Xibalba apologizes to La Muerte for betraying her, telling her he loves her. Back at the museum, Mary Beth ends the story. The chidren leave excited after hearing the story. As the bus is set to depart, the kids wave goodbye to Mary Beth, who reveals herself to be La Muerte, to the joy of the kids. The security guard reveals himself to be Xibalba. They kiss as the story ends, and the Candle Maker closes the Book of Life, reminding us all to write our own stories.

Retrieved from "https://movies.fandom.com/wiki/The_Book_of_Life?oldid=169782"
Community content is available under CC-BY-SA unless otherwise noted.