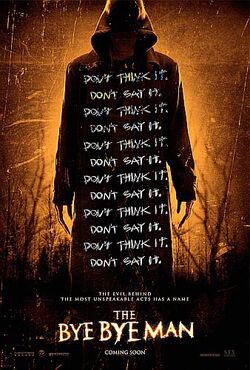 When three college students (Douglas Smith, Lucien Laviscount, Cressida Bonas) move into an old house off campus, they unwittingly unleash a supernatural entity known as The Bye Bye Man (Doug Jonas), who comes to prey upon them once they discover his name. The friends must try to save each other, all the while keeping The Bye Bye Man's existence a secret to save others from the same deadly fate.

The Bye Bye Man received generally negative reviews from critics. On Rotten Tomatoes, the film has an approval rating of 24%, based on 58 reviews, with an average rating of 3.5/10. The site's critical consensus reads, "The Bye Bye Man clumsily mashes together elements from better horror films, adding up to a derivative effort as short on originality as it is on narrative coherency or satisfying scares." On Metacritic, the film has a score of 37 out of 100 based on 22 critics, indicating "generally unfavorable reviews". Audiences polled by CinemaScore gave the film an average grade of "C" on an A+ to F scale.

Retrieved from "https://movies.fandom.com/wiki/The_Bye_Bye_Man?oldid=104539"
Community content is available under CC-BY-SA unless otherwise noted.