Start a Wiki
watch 01:51
The Loop (Movies)
Do you like this video?
The Call of the Wild 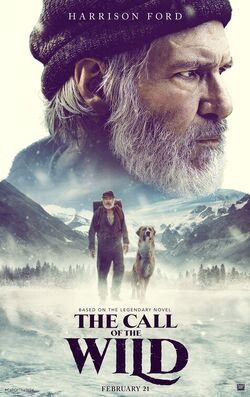 The Call of the Wild is an upcoming American adventure film based on the Jack London 1903 novel of the same name and Twentieth Century Pictures' previous 1935 film adaptation. The film is directed by Chris Sanders, in his live-action directorial debut, written by Michael Green, and stars Harrison Ford, Dan Stevens, Omar Sy, Karen Gillan, Bradley Whitford, and Colin Woodell.

A domesticated St. Bernard/Scotch Collie dog named Buck is stolen from his Santa Clara, California home and sold to freight haulers in Yukon. Crossing paths with a man named John Thornton, the two embark on an adventure where Buck finds his true place in the world.

Actor and stunt coordinator Terry Notary stood-in for the CGI creation of Buck, whose model was scanned after an adopted dog.

The Call of the Wild received mixed to positive reviews from critics. On Rotten Tomatoes, The film has a score of 66% based on 73 reviews with an average score of 5.97/10.

Retrieved from "https://movies.fandom.com/wiki/The_Call_of_the_Wild_(2020)?oldid=213170"
Community content is available under CC-BY-SA unless otherwise noted.