The Chronicles of Narnia: The Lion, the Witch and the Wardrobe

$745,013,115
The Chronicles of Narnia: The Lion, the Witch and the Wardrobe is a 2005 epic fantasy adventure film directed by Andrew Adamson and based on The Lion, the Witch and the Wardrobe, the first published and second chronological novel in C. S. Lewis's children's epic fantasy series, The Chronicles of Narnia. It was co-produced by Walden Media and Walt Disney Pictures and was distributed by Walt Disney Pictures. William Moseley, Anna Popplewell, Georgie Henley, and Skandar Keynes play Peter, Susan, Lucy and Edmund, four British children evacuated during the Blitz to the countryside, who find a wardrobe that leads to the fantasy world of Narnia. There they ally with the Lion Aslan (voiced by Liam Neeson) against the forces of Jadis, the White Witch (Tilda Swinton). The screenplay based on the novel by C. S. Lewis was adapted by Christopher Markus and Stephen McFeely.

The film was released on December 9th, 2005 in both Europe and North America to positive reviews and was highly successful at the box office. It won the 2005 Academy Award for Best Makeup and various other awards and is the first film in the series of films based on the books. An Extended Edition was released on December 12, 2006 and was only made available on DVD until January 31, 2007 when it was discontinued. It was the best selling DVD in North America in 2006 taking in $332.7 million that year.

In 1940, the four Pevensie siblings – Peter, Susan, Edmund, and Lucy – are among many children evacuated from London to escape the Blitz. They are sent to the countryside to live with Professor Digory Kirke. They play hide-and-seek in the professor's manor during a rainy day. Lucy finds a wardrobe which doubles as a portal to a forest in a magical land called Narnia. At a lamppost oddly located in the forest, she meets Mr. Tumnus, a faun, who invites her to tea at his house. There the faun puts Lucy to sleep by a flute then confesses that he invited her not out of hospitality but with the intent of kidnapping her to the White Witch. The Witch has tyrant Narnia for years, using magic to keep it frozen in a perpetual winter and no Christmas. She has ordered all Narnians to turn in any humans ("Sons of Adam" or "Daughters of Eve") they come across. But now that he has come to know and like a human, Tumnus repents his original intention and escorts Lucy back to the lamppost. Lucy returns through the wardrobe and finds that no time has passed during her absence. Her siblings do not believe her story about another world inside the wardrobe, which is now found to have a solid back panel.

Later tonight, Lucy again passes into Narnia. This time her brother Edmund chances to follow her. He encounters Jadis, who calls herself Queen of Narnia. When she learns that he is human and has two sisters and a brother, she places an enchantment on him. She urges him to bring his siblings to her castle, with the prospect of making him her heir. When Lucy and Edmund return together through the wardrobe, Edmund realized that the queen he met and the witch Lucy describe are one and the same. He denies to the others he has been in Narnia at all, upsetting Lucy. Peter and Susan are puzzled by Lucy's insistence, and consult the professor, who surprises them by taking Lucy's side in the dispute of Narnia's existence.

Soon afterward, all four children enter Narnia together after hiding in the wardrobe to avoid the professor's strict housekeeper, Mrs. Macready. Peter scolds Edmund for lying. They take coats from the wardrobe before exploring the winter cold ahead. Lucy guides them to Tumnus' cave, but they find it ransacked with a notice from Jadis proclaiming his arrest for harboring humans. A talking beaver approaches them, proves himself a friend, and hides the children in his den. There, Mr. and Mrs. Beaver tell them of a prophecy that Jadis' power will fail when two Sons of Adam and two Daughters of Eve sit the four thrones. Aslan, the wise Great lion and rightful King, has been absent for many years but is now "on the move again" in Narnia. Edmund steals away to Jadis' castle, which is occupied with statues of Narnian victims she has turned to stone. Jadis is irritated when Edmund appears alone and angrier still to learn Aslan may have returned. Mr. Beaver recognized Edmund's betrayal, and they set off at once to seek Aslan at the Stone Table. The Witch sends wolves to track down the children and the beavers, who narrowly escape with the help of a fox. Edmund is chained in the Witch's dungeon, where he meets Mr. Tumnus. Jadis demands Edmund reveal his siblings' location. When Tumnus claims Edmund know nothing, Jadis corrects that Edmund had turned him in, and then petrifies Tumnus to stone, making Edmund perceive Jadis' true nature and feel repentant. She takes him on her sledge to catch the others or to reach Aslan's court before them.

As they travel across frozen rivers, the Witch's spell over Narnia begins to weaken. Father Christmas (who has not been seen in Narnia for a hundred years) arrives with gifts: a help-summoning horn and a bow with arrows for Susan, a dagger and a bottle of healing cordial for Lucy, and a sword for Peter. Evading wolves led by Maugrim, the children sail the river, Lucy almost drown though made it. Snow melts and winter ends. Aslan welcomes the children and beavers to his camp near the Stone Table. Upon hearing Edmund's situation, he orders a rescue party of loyal Narnians. Realizing she can no longer pursue the other children, Jadis opts she should simply kill Edmund to prevent the prophecy from being fulfilled. He is detain to a tree and tormented by Ginarrbrik, the Witch's servant dwarf. Aslan teaches Peter how to know one's potential and understand govern of Deep Magic. Soon, two wolves ambush Lucy and Susan. When Peter intervenes, Maugrim attacks and Peter kills him. Peter is knighted by Aslan. Some of Aslan's troops follow the other wolf to the Witch's camp and Oreius, a centaur rescue Edmund. He is favorably reunited with his siblings. Peter, concern of his younger siblings' safety tells them to leave for home, but Lucy, and Edmund say they must stick together, who is now convinced how dangerous the White Witch's power is. While practicing for war, Jadis approaches in truce to parley with Aslan. She insists that, according to "deep magic from the dawn of time," she holds the right to kill Edmund following his treason. Aslan bargains with her privately and she renounces her claim.

That evening, Aslan secretly walks to the Stone Table, shadowed by Susan and Lucy. Upon noticing them, Aslan welcomes their company but warns them not to interfere with what is about to happen. He has traded his own life to the Witch for Edmund's, and the girls watch from the bushes as Jadis oversees his shaming before her underlings. She orders Aslan tied to the Stone Table, shaved and muzzled; and she administers the killing blow herself. Confident now of victory, the Witch leads her army away to battle. Susan and Lucy remain and keep vigil all night, weeping over Aslan's abandoned body. They un-muzzle him and see mice gnaw away his bonds. The sisters had a dryad of the trees deliver the grave news. Edmund coaxes Peter to direct the army and proceed to war. As the sun rises, the Stone Table cracks and Aslan is restored to life. He tells Lucy and Susan that deep magic balances the universe, Jadis might have saw the deep magic indifferent, and was unaware the Stone Table will reverse death of an innocent killed in place of a traitor. Aslan carries Lucy and Susan on his back as he hurries to Jadis' castle. He breathes on the stone statues in the courtyard, restoring them and Mr. Tumnus to life.

Peter and Edmund lead the Narnians against Jadis. As the Witch's army is greater in number, the Narnians send a swarm of gryphons drop boulders for a surprise attack. A phoenix's fire wall is launched, but Jadis dispels it. Oreius kills General Otmin, a minotaur second-in-command, though Jadis stabs him to stone. Edmund destroys Jadis' effective staff and she mortally wounds him in return. As Peter spars Jadis, and the Narnians are overwhelmed, Aslan arrives with the former statues as reinforcements. The Narnians rout Jadis' supporters, and Aslan defeats Jadis. Before Ginarrbrik could finish off Edmund, Susan strikes an arrow at Ginarrbrik. Aslan breathes life into those Jadis had petrified on the battlefield, and Lucy uses her magic cordial to revive Edmund and the other wounded. The Pevensie siblings are crowned kings and queens of Narnia at Cair Paravel in celebration. Subsequently, Aslan slips away and disappears. Tumnus assures Lucy they will see Aslan again and mustn't press him since he is not a 'tamed lion.' The land maintains a Golden Age under the tetrarchs' rule. The Pevensie siblings lived in great joy and peace, and strangely whenever they recall their life in the other world they only remembered it as a memory of a childhood dream.

Fifteen years later, Mr. Tumnus has informed the now four adult rulers of a wish-granting white stag roaming through the forest. Chasing the white stag whereupon the Pevensie siblings rediscover the lamppost, and experience the familiar feeling that they have seen it before. They soon find their way not through branches but coats. The siblings tumble out of the wardrobe as children again, ascertaining it is the same time and day they left. Kirke then comes in and Peter expresses he wouldn't believe them if they told so. The professor responds "Try me." Lucy later attempts to enter Narnia through the wardrobe again, behind her, Kirke tells he has already tried, and they will probably return to Narnia when they least expect it, hinting that theirs would prove not to be the first adventure in Narnia, nor by any means the last. Aslan's roar is heard from inside the wardrobe.

Behind the Scenes and Narnia Art[edit | edit source]

Tilda Swinton as the White Witch

James and Mr. Tumnus and Georgie and Lucy BTS

The front cover of the DVD

The back of the DVD 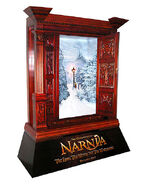 Edmund and the White Witch

Edmund sitting in the Witch's chair in her palace

Lucy and Mr. Tumnus at the Lightpole

Edmund in the Queen's courtyard

Retrieved from "https://movies.fandom.com/wiki/The_Chronicles_of_Narnia:_The_Lion,_the_Witch_and_the_Wardrobe?oldid=286573"
Community content is available under CC-BY-SA unless otherwise noted.