watch 00:59
The Loop (Movies)
Do you like this video?
The Color Purple 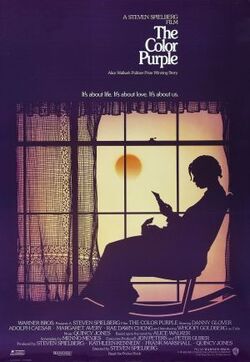 The Color Purple is a 1985 American period drama film directed by Steven Spielberg, based on the Pulitzer Prize-winning novel of the same name by Alice Walker. It was Spielberg's eighth film as a director, and was a change from the summer blockbusters for which he had become famous. The film starred Danny Glover, Desreta Jackson, Margaret Avery, Oprah Winfrey, Adolph Caesar, Rae Dawn Chong, and introducing Whoopi Goldberg as Celie Harris.

Filmed in Anson and Union counties in North Carolina, the film tells the story of a young African American girl named Celie Harris and shows the problems African American women faced during the early 1900s, including poverty, racism, and sexism. Celie is transformed as she finds her self-worth through the help of two strong female companions.

Taking place in the Southern United States during the early 1900s to late 1940s, the movie tells the life of a poor African American woman named Celie Harris (Whoopi Goldberg) whose abuse begins when she is young. By the time she is 14, she has already had two children by her father (Leonard Jackson). He takes them away from her at childbirth and forces the young Celie (Desreta Jackson) to marry a wealthy young local widower Albert Johnson, known to her only as "Mister" (Danny Glover), who treats her like a slave. Albert makes her clean up his disorderly household and take care of his unruly children. Albert beats her often, intimidating Celie into submission and near silence. Celie's sister Nettie (Akosua Busia) comes to live with them, and there is a brief period of happiness as the sisters spend time together and Nettie begins to teach Celie how to read. This is short-lived; after Nettie refuses Albert's predatory affections once too often, he kicks her out. Before being run off by Albert, Nettie promises to write to Celie saying, "Nothing but death can keep me from it!".

Albert's old flame, jazz singer Shug Avery (Margaret Avery), for whom Albert has carried a torch for many years, comes to live with him and Celie. Delirious with sickness, Shug initially declares Celie as "ugly" on their first meeting. Despite this, they eventually become close friends and Shug helps Celie raise her self-confidence. Shug and Celie enter into a sexual relationship (more pronounced in the book, but only hinted at in the film). Celie also finds strength in Sofia (Oprah Winfrey), who marries Albert's son Harpo (Willard E. Pugh). Sofia has suffered abuse from the men in her family, but unlike Celie, she refuses to tolerate it. This high-spiritedness proves to be her downfall, as a rude remark to the town mayor's wife and a retaliatory punch to the mayor himself ends with Sofia beaten and jailed.

Meanwhile, Nettie has been living with missionaries in Africa and writing frequently to Celie. Celie, however, is unaware of the correspondence as Albert confiscates the letters, telling Celie that she will never hear from her sister again. During a visit from Shug and her new husband, Grady, Celie and Shug discover many years' worth of Nettie's correspondence. Reconnecting with her sister and the assurance that she is still alive helps give Celie the strength to stand up to Albert. She prepares to slit his throat while shaving him, but is physically stopped by Shug.

During a subsequent family dinner, Sofia is shown to be prematurely aged and permanently disfigured due to the severe beatings she received in jail, and demoralized into an almost catatonic state. At the dinner, Celie finally asserts herself, excoriating Albert and his father. Shug informs Albert that she and Grady are leaving, and that Celie is coming with them. Harpo's girlfriend Squeak (Rae Dawn Chong) declares she is going with them as well. Despite Albert's attempts to verbally abuse Celie into submission, she stands up to him by mentioning that he kept Nettie away from her because Nettie was the only one who really loved her. Before she leaves him permanently, she tells him that until he does the right thing, everything he does will go wrong. After seeing Celie stand up for herself, Sofia returns to her normal self, laughing hysterically at a dumbfounded and embarrassed Albert. She also warns Celie not to follow in her own footsteps as Celie holds a knife to Albert's throat. It is at this point Celie curses Albert saying, "Until you do right by me, everything you think about gonna fail". As Shug, Grady, Squeak, and Celie go quickly to the car, Albert readies to beat Celie. Celie stands up on the sideboards of Grady's car and curses Albert by raising her hand in his face with a determined stare. Dumbfounded, Albert backs away and the car drives off.

In Tennessee, Celie opens a haberdashery, making and selling one-size-fits-all slacks for men and women. Upon the death of her father, she learns that he was, in fact, her stepfather, and that she has inherited her childhood home, the farm, and a shop from her real father. She opens her second slacks shop in town, naming it Miss Celie's Folks Pants, while Harpo and Sofia reconcile. Meanwhile, Albert is feeling the effects of Celie's words. His fields and home languish into almost nonexistence as he slips into alcohol-fueled idleness, spending most of his time at Harpo's juke joint. At one point, his father is seen suggesting that he find a new wife, but Albert casually grabs his father by the arm and turns him off his property. Years of guilt finally catch up with Albert, with the knowledge that he has been a horrible person most of his life, especially to Celie. In a sudden act of kindness unknown to her, Albert takes all the money he has saved over the years, goes to the immigration office, and arranges for Nettie, her husband, and Celie's two children and daughter-in-law to come back to America from Africa. Celie's children, Adam and Olivia, are reunited with her at Celie's farm. Albert looks on from a distance, and Shug smiles at him because he finally did the right thing. Nettie and Celie play their childhood clapping game as the sun sets.

Retrieved from "https://movies.fandom.com/wiki/The_Color_Purple?oldid=66162"
Community content is available under CC-BY-SA unless otherwise noted.