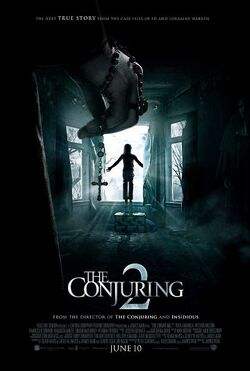 The Conjuring 2 is a 2016 American supernatural horror film directed by James Wan and written by Carey Hayes, Chad Hayes, Wan and David Leslie Johnson. It is the sequel to the 2013 film The Conjuring, with Patrick Wilson and Vera Farmiga reprising their roles and also starring Frances O'Connor, Madison Wolfe, Simon McBurney and Franka Potente. The film follows the Warrens as they travel to the United Kingdom to assist the Hodgson family, who are experiencing poltergeist activity at their Enfield council house in 1977. It was released on June 10, 2016.

A sequel is scheduled to be released in 2020, titled The Conjuring 3.

In 1977, paranormal investigators Ed (Patrick Wilson) and Lorraine Warren come out of a self-imposed sabbatical to travel to Enfield, a borough in north London. There, they meet Peggy Hodgson, an overwhelmed single mother of four who tells the couple that something evil is in her home. Ed and Lorraine believe her story when the youngest daughter starts to show signs of demonic possession. As the Warrens try to help the besieged girl, they become the next target of the malicious spirits.

Like its predecessor, The Conjuring 2 received generally positive reviews from critics. The review aggregator website Rotten Tomatoes gives the film an approval rating of 76%, based on 142 reviews, with an average rating of 6.6/10. The site's critical consensus reads, "The Conjuring 2 can't help but lose a bit of its predecessor's chilly sting through familiarity, but what remains is still a superior ghost story told with spine-tingling skill." Metacritic assigned the film a weighted average score of 65 out of 100, based on 38 critics, indicating "generally favorable reviews". On CinemaScore, audiences gave the film an "A–" grade on an A+ to F scale, the same score earned by its predecessor.

Retrieved from "https://movies.fandom.com/wiki/The_Conjuring_2?oldid=156995"
Community content is available under CC-BY-SA unless otherwise noted.