watch 01:12
The Loop (Movies)
Do you like this video?
The Curse of La Llorona 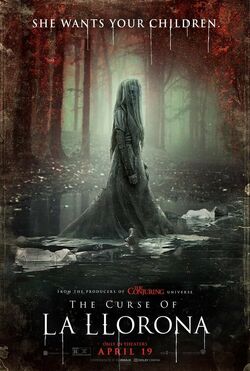 The Curse of La Llorona is a 2019 American supernatural horror film directed by Michael Chaves. The cast of the film consists of Linda Cardellini, Raymond Cruz, and Patricia Velásquez.

It is the sixth installment in The Conjuring Universe.

Retrieved from "https://movies.fandom.com/wiki/The_Curse_of_La_Llorona?oldid=163420"
Community content is available under CC-BY-SA unless otherwise noted.