$1,084,439,099
The Dark Knight Rises is an 2012 American superhero/action film starring Christian Bale, Anne Hathaway, Tom Hardy and Michael Caine. It is the final installment in the Batman/Dark Knight series, preceded by Batman Begins (2005) and The Dark Knight (2008). The film was released on July 20, 2012 in theatres and IMAX.

Christopher Nolan was hesitant about returning to the series for a second time, but agreed after developing a story with his brother and Goyer that he felt would conclude the series on a satisfactory note. Nolan drew inspiration from Bane's comic book debut in the 1993 Knightfall storyline, the 1986 series The Dark Knight Returns, and the 1999 storyline No Man's Land. Filming took place in locations including Jodhpur, London, Nottingham, Glasgow, Los Angeles, New York City, Newark, and Pittsburgh. Nolan used IMAX cameras for much of the filming, including the first six minutes of the film, to optimize the quality of the picture. A variation of the Batplane termed the "Bat", an underground prison set, and a new Batcave set were created specifically for the film. As with The Dark Knight, viral marketing campaigns began early during production. When filming concluded, Warner Bros. refocused its campaign: developing promotional websites, releasing the first six minutes of the film, screening theatrical trailers, and sending out information regarding the film's plot.

The Dark Knight Rises premiered in New York City on July 16, 2012. The film was released in Australia and New Zealand on July 19, 2012, and in North America and the United Kingdom on July 20, 2012. Upon release, it received critical acclaim and is widely considered by publications to be one of the best films of 2012. Like its predecessor, the film grossed over $1 billion worldwide at the box office, making it the second film in the Batman film series, and by extension the second film based on a DC Comics character, to earn $1 billion. It is currently the eleventh-highest-grossing film of all time, the third-highest-grossing film of 2012, and the third-highest-grossing superhero film of all time.

Eight years after Harvey Dent's death, the Dent Act grants the Gotham City Police Department powers which nearly eradicate organized crime. Feeling guilty for covering up Dent's crimes, Police Commissioner James Gordon writes a resignation speech confessing the truth, but decides not to use it. Batman has disappeared; Bruce Wayne has become a recluse. Cat burglar Selina Kyle obtains Bruce's fingerprints from his home, kidnaps a congressman, then disappears. Kyle hands Bruce's fingerprints to Phillip Stryver, an assistant to Bruce's business rival John Daggett, in hope of having her criminal record erased. Stryver double-crosses Kyle, but she uses the congressman's stolen phone to alert the police to their location. Gordon and the police arrive to find the congressman, then pursue Stryver's men into the sewers while Kyle flees. A masked man called Bane captures Gordon. Gordon escapes and is found by John Blake, a once-orphaned patrol officer who has deduced Batman's true identity from their similar backgrounds. Gordon promotes Blake to detective, with Blake reporting directly to him.

Wayne Enterprises is unprofitable after Bruce discontinued his fusion reactor project when he learned that the core could be weaponized. Later, Bane attacks the Gotham Stock Exchange, using Bruce's fingerprints in a transaction that bankrupts Wayne. Alfred Pennyworth, concerned that Bruce has not moved on from being Batman, reveals to him that Rachel Dawes had intended to marry Dent before she died, and resigns in an attempt to dissuade him. Fearing that Daggett, Bane's employer, would gain access to the reactor, Bruce asks Wayne Enterprises board member Miranda Tate to take over his company. Bane later kills Daggett. After being promised the software to erase her criminal record, Kyle agrees to take Batman to Bane, but instead leads him into a trap. Bane appears and reveals that he intends to fulfill Ra's al Ghul's mission to destroy Gotham with the League of Shadows remnant. He delivers a crippling blow to Batman's back, then takes him to a foreign, well-like prison where escape is virtually impossible. The inmates tell Bruce the story of Ra's al Ghul's child, born in the prison and cared for by a fellow prisoner before escaping, the only prisoner to have ever done so; Bruce assumes the child to be Bane.

Meanwhile, Bane lures Gotham police underground and collapses the exits. He kills Mayor Anthony Garcia and forces an abducted physicist, Dr. Leonid Pavel, to convert the reactor core into a nuclear bomb before killing him. Bane uses the bomb to hold the city hostage and isolate Gotham from the world. Using Gordon's stolen speech, Bane reveals the cover-up of Dent's crimes and releases the prisoners of Blackgate Penitentiary, initiating a revolution. The wealthy and powerful have their property expropriated, are dragged from their homes, and given show trials presided over by Dr. Jonathan Crane, where any sentence means likely death with exile forcing the defendants to walk across the frozen bay to get to the other side.

After months of recovery and re-training, Bruce escapes from the prison and enlists Kyle, Blake, Tate, Gordon, and Lucius Fox to help stop the bomb's detonation. While the police and Bane's forces clash, Batman defeats Bane, but Tate intervenes and stabs Batman, revealing herself to be Talia al Ghul, Ra's al Ghul's child who escaped the prison aided by her fellow prisoner and protector, Bane. She plans to complete her father's work by detonating the bomb and destroying Gotham, but Gordon blocks her signal, preventing remote detonation; Talia leaves to find the bomb. Bane prepares to kill Batman, but Kyle kills Bane using the Batpod. Batman pursues Talia with the Bat, an aircraft developed by Fox, to bring the bomb back to the reactor, where it can be stabilized. Talia's truck crashes, but she remotely destroys the reactor before dying. With no way to stop the detonation, Batman uses The Bat to haul the bomb over the bay, where it detonates.

In the aftermath, Batman is presumed dead and is honored as a hero. With Bruce also presumed dead, Wayne Manor is left to the city to become an orphanage, and Wayne's remaining estate is left to Alfred. Fox discovers that Bruce had fixed The Bat's autopilot, and Gordon finds the Bat-Signal refurbished. While visiting Florence, Alfred witnesses Bruce and Kyle together. Blake resigns from the police force and inherits the Batcave. 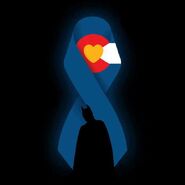 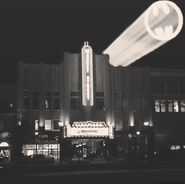 If Batman stands for anything at all, it is that out of tragedy, can come greatness. Let's be greater. 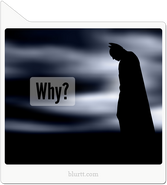 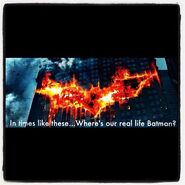 In times like these... Where's our real life Batman?

Why do we fall, Master Wayne?