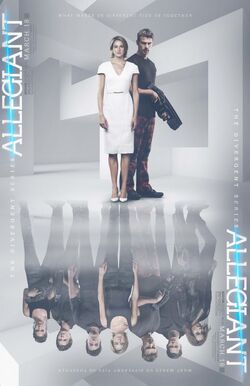 The Divergent Series: Allegiant (also known simply as Allegiant) is a 2016 American science fiction adventure film directed by Robert Schwentke with a screenplay by Noah Oppenheim, Adam Cooper, Bill Collage, and Stephen Chbosky. It is the first of two cinematic parts based on the novel Allegiant, the final book in the The Divergent trilogy by Veronica Roth, and the third installment in The Divergent Series, produced by Lucy Fisher, Pouya Shabazian and Douglas Wick, and distributed by Summit Entertainment. The film stars Shailene Woodley, Theo James, Octavia Spencer, Ray Stevenson, Zoë Kravitz, Miles Teller, Ansel Elgort, Naomi Watts, and Jeff Daniels. It is the sequel to The Divergent Series: Insurgent and will be followed by the concluding entry, The Divergent Series: Ascendant. The film was released on March 18, 2016.

Retrieved from "https://movies.fandom.com/wiki/The_Divergent_Series:_Allegiant?oldid=120713"
Community content is available under CC-BY-SA unless otherwise noted.