The Edge of Seventeen 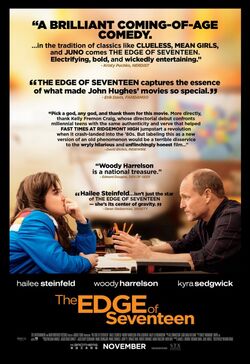 The Edge of Seventeen is an American coming-of-age film directed by Kelly Fremon Craig. The cast of the film consists of Hailee Steinfeld, Woody Harrelson, Kyra Sedgwick, Haley Lu Richardson, and Hayden Szeto.

In October 2015, Nadine Franklin (Hailee Steinfeld), a high school junior in the suburbs of Portland, confides to her school teacher Mr. Bruner (Woody Harrelson) that she plans to commit suicide.

Nadine narrates her life so far: By age seven, differences between Nadine and her more popular older brother Darian (Blake Jenner) are already obvious. Nadine has a tempestuous relationship with her overly dramatic and image conscious mother Mona (Kyra Sedgwick) who seems to favor her brother, while Nadine's father, Tom (Eric Keenleyside) is the only immediate member she feels close to. At age 13, Nadine is buoyed by her relationships with her best friend Krista (Haley Lu Richardson) and her father. Nadine's father suffers a fatal heart attack while driving. As a result of her father's death, Nadine's life turns upside down. Up to the time Nadine is 17, Krista was the only "good part" of her life.

One night at home, Nadine and Krista get drunk, while Darian throws a pool party. Nadine falls asleep and wakes up to find Krista in bed with Darian who is naked. Krista tries to fix things, but Nadine is tormented about her best friend being with her brother. Krista and Darian think to break it off, but he ends up asking her to be his girlfriend. Nadine feels desperately alone and resorts to her classmate Erwin Kim (Hayden Szeto), who has a crush on her. She discovers that, although he is awkward, he has a great sense of humor and is kind. Nadine, however, is attracted to older student Nick Mossman (Alexander Calvert), whom she has only met once.

Later, Darian invites Krista to a house party, who insists Nadine join them. When they arrive, Krista is introduced to other students, who invite Krista and Darian to play beer pong, leaving Nadine on her own. After several failed attempts at talking to others at the party, Nadine goes outside and sits on a porch bench with another partygoer, who remarks how inferior Nadine seems compared to her popular, athletic brother. This conversation drives Nadine to leave the party without Krista or Darian. Nadine calls Erwin and asks him if he'd like to go with her to the amusement park. There he tries to kiss her but it turns into a comedy of awkwardness. At the end of the night Nadine tells him he's a great guy.

Krista confronts Nadine for ignoring her the night before, so Nadine makes her choose between herself and Darian. Krista does not want to choose, and Nadine angrily tells Krista their friendship is over.

At school, Mr. Bruner has become Nadine's go-to person for support. He lets her vent her anger at him, but afterwards, as a way to guilt her, reveals that she is his favorite student. Erwin and Nadine spend the evening in his heated swimming pool. Although Erwin is wealthy, his parents conduct business overseas for much of the year; he has become lonely. Nadine learns that he is an animation filmmaker and accepts his invitation to their school's short-film festival.

One morning as Mona drives Nadine to school they have a fight that results in Mona taking her to work with her. At the workplace, Nadine has an argument with her mother about her father. Nadine steals Mona's keys and drives away. In the heat of the moment, she writes a sexually explicit text to Nick but decides against sending it. Nonetheless, she accidentally hits "send" and is mortified.

The narration switches to when Nadine told Mr. Bruner that she is going to kill herself, and he tries to keep Nadine calm about the text she sent. She receives a text from Nick, asking her to hang out that evening, exciting Nadine. Mona calls Darian, confessing that Nadine is missing and that she has depended on her son as the father figure since Tom died. Nadine has even loss her faith in God, saying that he just make fun of her... but ¿Karma? time, she was on the toilet reflecting when she realizes that has no toilet paper. Darian leaves to find Nadine. During their date, Nick repeatedly attempts to have sex with Nadine in his car, having interpreted the text as a proposition, while she had been wanting a romantic date. Embarrassed and heartbroken, Nadine runs away and calls Mr. Bruner while waiting in a donut shop, who drives her to his house, where they wait with his wife and baby boy until Darian arrives. Darian confesses to Nadine that although his life seems perfect, he has been secretly suffering from the pressures of having to take care of the family ever since their father died. Darian confesses that he feels trapped and did not apply to colleges far away, and the only person who helps him smile is Krista. But that is a problem, too, since Nadine is upset that Krista is with him. Nadine confesses to her brother that she has been dealing with self-hatred, intensified by her envy of him. They hug and their feud ends.

Nadine readies herself for the school's film festival. Nadine walks downstairs on her way out and is welcomed by Darian and Krista. The two girls reconcile and agree to catch up later. Mona fears that Nadine has run away. Realizing that her mother is worried, Nadine texts her saying that she is safe. Mona decides to trust her word. Erwin's animated film is a story about a green alien boy who falls in love with a girl at high school, but is rejected by her. Realizing the metaphor, Nadine apologizes to Erwin for taking so long to accept his love. Erwin is congratulated by his colleagues. When he introduces Nadine to them, she greets them with a smile, finally opening up to others.