$217,776,646
The Emoji Movie is a 2017 American computer-animated comedy film directed by Tony Leondis and written by Leondis, Eric Siegel and Mike White, based on the emoji symbols. It stars the voices of T. J. Miller, James Corden, Anna Faris, Maya Rudolph, Steven Wright, Rob Riggle, Jennifer Coolidge, Christina Aguilera, Sofía Vergara, Sean Hayes and Patrick Stewart. The film centers on Gene, a multi-expressional emoji who lives in a teenager's phone, and who sets out on a journey to become a normal meh emoji like his parents.

Produced by Sony Pictures Animation, and distributed by Columbia Pictures, The Emoji Movie premiered on July 23, 2017 at the Regency Village Theatre, was theatrically released in the United States on July 28, 2017 and has grossed over $160 million worldwide. It received overwhelmingly negative reviews from critics, many of whom compared it unfavorably to The Lego Movie, Inside Out and Wreck-It Ralph.

The film starts with a bunch of high school students walking around, all immersed in their smartphones. We travel inside the world of a smartphone belonging to a freshman named Alex. The Emojis live in the city of Textopolis, and each of them performs the same function they were designed for. Gene is supposed to be a "meh" Emoji like his parents Mel and Mary, but unlike all the other Emojis, Gene has multiple expressions and feelings, which has made him something of an outsider.

Gene is set for his first day as an official Emoji, despite his parents not having much confidence in him. He goes to the station where he meets Smiler, the head of the text center who was the original Emoji. Among other popular Emojis are the Devil, Fist Bump, Flamenca, and even Poop. All of them stand in the cube where they are scanned and sent from Alex's phone.

In the human world, Alex gets a text from his crush Addie. He wants to send her an Emoji, so he starts to select Gene as he is in the cube. However, he panics as he is uncertain what face to make, and he causes Alex to send a weird Emoji to Addie. Gene then latches onto the scanner and causes destruction to the cube.

Gene is called to Smiler's office. She tells Gene that because of this mishap, he is a malfunction and must be deleted to prevent anything else happening to the phone. She sends her AV bots after him, but Gene runs into the lounge for popular Emojis. The bots find him and start to cause chaos, but Gene is helped by formerly popular Emoji Hi-5 to avoid detection.

Hi-5 brings Gene to the Loser Lounge where Emojis that never get used hang out. Gene tells Hi-5 about his dilemma, to which Hi-5 proposes that they find a hacker named Jailbreak to reprogram Gene to be a regular meh Emoji so that he won't get deleted. The two of them sneak out of the lounge so that the bots won't see them, and they flee Textopolis.

Mel and Mary realize Gene is missing, so they go searching for him. One of the bots sees them leaving, which Smiler can see through a surveillance camera. She sends more bots to go find Gene.

Gene and Hi-5 explore some of the other apps in the phone, including Facebook. They reach a piracy app where they hope to find Jailbreak. It appears to be a bar of sorts for trolls, viruses, and spam bots. The two find Jailbreak, who isn't interested in helping them until she sees that Gene makes multiple faces. Smiler's bots then enter and start causing trouble by deleting the patrons, forcing the other three to run.

Jailbreak proposes going to the phone's Dropbox to reprogram Gene and so she can live on The Cloud. They first pass through Candy Crush, where Gene gets stuck inside the game. The other two match the candies to the same colors until they are able to free Gene. However, their actions in the game cause the sound effects to play when Alex is trying to ask Addie to the school dance, causing him to look weird in front of her.

The trio then go into the Just Dance app where they meet the avatar Akiko Glitter. They must dance in sync with the game if they want to proceed, or else they will fall to their doom. Gene helps Jailbreak find her groove and dance. In the process, her hat flies off to reveal that Jailbreak is an escaped princess Emoji. As they reach the end of the game, the bots show up and program themselves to dance. This causes the app to make noises during Alex's class, which embarrasses him. He deletes the app, forcing the trio to run to the exit. The bots are destroyed, but Hi-5 is pulled into the trash by one bot.

Gene and Jailbreak are close to the Dropbox, but Gene wants to go to the trash to save Hi-5, and he convinces Jailbreak to help him. They use music streams from Spotify to head to the dump faster. During this time, Jailbreak tells Gene she likes him the way he is.

Having had enough of his phone's screw-ups, Alex sets an appointment for the next day to have his phone wiped clean. The top Emojis catch wind of this news, and Smiler sends an upgraded bot to go after Gene.

Hi-5 is lamenting his fate in the trash with the rest of the deleted characters. He finds an email that Alex meant to send to Addie proclaiming his feelings for her, which included his use of Hi-5, but Alex never sent it. Gene then comes down on a rope to save Hi-5 and pull him out.

Mel and Mary have an argument (or about as well as two meh's can argue) about why Gene is the way he is. They separate but later find each other in Alex's Paris trip photo album on Instagram. Mel admits that he also has multiple expressions and feels responsible for how Gene is. He reconciles with Mary and they continue to head out to find their son.

On their way to the Dropbox, the trio are found by the upgraded bot. They manage to lose it and they hit the Firewall that blocks the Dropbox. They try to find out the password, but Gene keeps getting burned with each wrong answer. Hi-5 mentions the e-mail to Addie, revealing that her name is Alex's password.

The trio enter the Dropbox, but before Gene can be reprogrammed, he realizes he has feelings for Jailbreak and tries expressing it to her. She likes him too but doesn't want to abandon her plan to live on The Cloud, since she felt like a stereotype being a princess Emoji. Heartbroken, Gene voluntarily takes on the meh face and heads back home, but is promptly captured by the upgraded bot. Hi-5 runs to tell Jailbreak. She uses her princess powers to whistle and summon a Twitter bird to take them back to Textopolis.

Gene is brought back to the text center just as Alex makes it to his appointment. Smiler prepares to have Gene deleted, but Mel and Mary rush in to stop her. Mel reveals his many faces, which makes Smiler throw him in to get deleted as well. Hi-5 and Jailbreak burst through the ceiling and fight the upgraded bot. Jailbreak shuts it off, and the bot falls on top of Smiler. Unfortunately, Alex's phone is plugged in, and everything on the phone starts to get wiped. Gene enters the cube as Jailbreak scans him. With his multiple expressions, Gene gets Alex's attention, as all the faces represent how Alex feels about Addie. Alex sends Addie the text, and she likes it. She tells Alex she'll go to the dance with him. Alex unplugs his phone, and the Emojis are safe.

The Emojis all see Gene as a hero. He becomes the first multi-faced Emoji, while Hi-5 is popular once again, and Jailbreak resumes her role as a princess. The Emojis then all have a dance party.

During the closing credits, Smiler has been sent to the Loser Lounge and must now wear dental headgear after the bot fell on her. 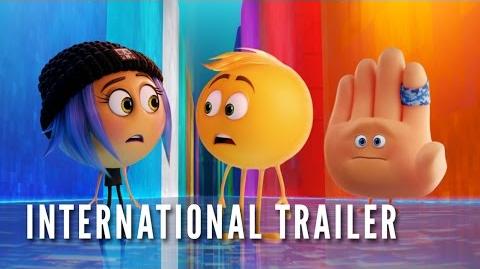 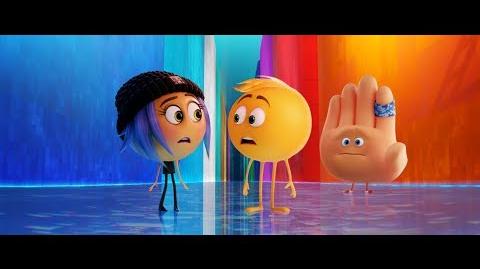 The Emoji Movie at the Internet Movie Database

Retrieved from "https://movies.fandom.com/wiki/The_Emoji_Movie?oldid=198594"
Community content is available under CC-BY-SA unless otherwise noted.