Start a Wiki
The End of Love 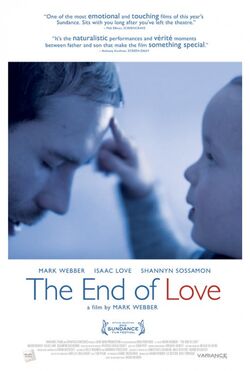 The End of Love is a drama film written and directed by Mark Webber. A drama centered on the relationship between a young father and his infant son after the death of the boy's mother.

When the mother of his two-year-old son suddenly passes away, struggling actor Mark is forced to confront his shortcomings. With his fate and his son's now intertwined, he grapples with his ability to grow up - stuck between the life he once knew and the one waiting for him.

When he has a meaningful encounter with a young mother, Mark is no longer able to live in the comfort of denial.

Set against the backdrop of Los Angeles,this is an intimate and honest slice-of-life portrait of a father and son in transition.


Retrieved from "https://movies.fandom.com/wiki/The_End_of_Love?oldid=74619"
Community content is available under CC-BY-SA unless otherwise noted.