Start a Wiki
The Family 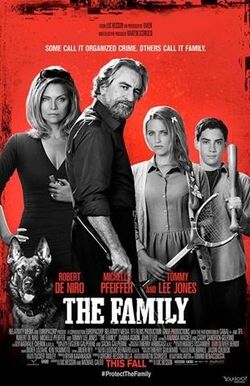 Directed By
Luc Besson
Produced By
Written By

The Family (2013) - a.k.a. Malavita or "Underworld" - is a French crime-comedy film starring Robert De Niro, Michelle Pfeiffer, Tommy Lee Jones, and Dianna Agron. Written by Tonino Benacquista and directed by Luc Besson, the film features a mafia family under the witness protection program looking to change their lives. It is based on the novel Malavita (English title: "Badfellas") written by Tonino Benacquista. Currently, the film's release date is set for September 13, 2013.

The Manzoni family, a notorious mafia clan, is relocated to Normandy, France under the witness protection program, where fitting in soon becomes challenging as their old habits die hard.[1]

The Family (2012) - Theatrical Trailer for The Family
Theatrical trailer

Retrieved from "https://movies.fandom.com/wiki/The_Family?oldid=74713"
Community content is available under CC-BY-SA unless otherwise noted.