Start a Wiki
watch 01:16
The Loop (Movies)
Do you like this video?
The Fate of the Furious 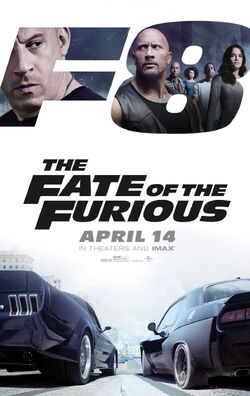 The Fate of the Furious (alternatively known as Fast & Furious 8 or Furious 8) is a 2017 American action film directed by F. Gary Gray and written by Chris Morgan. It is the eighth installment in The Fast and the Furious franchise. The film stars Vin Diesel, Dwayne Johnson, Michelle Rodriguez, Tyrese Gibson, Chris Bridges, Eva Mendes, Lucas Black, Kurt Russell and Jason Statham.

Plans for an eighth installment was first announced in March 2015 when Diesel appeared on Jimmy Kimmel Live! and announced that the film would be set in New York. Preparations for the film began immediately after the release of Furious 7 with Diesel, Morgan and producer Neal H. Moritz re-signing. After setting an initial release date in the same month, casting took place between April and June of 2015, with the remaining cast yet to be rounded out. In October 2015, Gray, best known for directing Straight Outta Compton (2015), was announced to direct the film in place of James Wan, who had directed the previous film. Principal photography began in March 2016 in Mývatn, Iceland, with other filming locations set to include Atlanta and New York.

The film marks the first film of the franchise other than The Fast and the Furious: Tokyo Drift not to star Paul Walker, who died in a single-vehicle crash on November 30, 2013, while filming Furious 7 with only half-completed. The film was released on April 14, 2017.

With Dom (Vin Diesel) and Letty (Michelle Rodriguez) married, Brian and Mia retired and the rest of the crew exonerated, the globe-trotting team has found some semblance of a normal life. They soon face an unexpected challenge when a mysterious woman named Cipher (Charlize Theron) forces Dom to betray them all. Now, they must unite to bring home the man who made them a family and stop Cipher from unleashing chaos.

The Fate of the Furious received mixed to positive reviews from critics. On Rotten Tomatoes, the film has an approval rating of 67% based on 302 reviews, with an average rating of 6.14/10. The site's critical consensus reads, "The Fate of the Furious opens a new chapter in the franchise, fueled by the same infectious cast chemistry and over-the-top action fans have come to expect." On Metacritic, which assigns a normalized rating, the film has a score 56 out of 100, based on 45 critics, indicating "mixed or average reviews". On CinemaScore, audiences gave the film an average grade of "A" on an A+ to F scale.

Retrieved from "https://movies.fandom.com/wiki/The_Fate_of_the_Furious?oldid=208234"
Community content is available under CC-BY-SA unless otherwise noted.