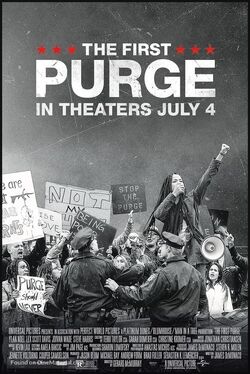 The First Purge is a 2018 American action horror film directed by Gerard McMurray. The film will be a prequel to the 2013 film The Purge, and will be the fourth installment in The Purge franchise overall. The cast of the film consists of Y'Lan Noel, Melonie Diaz, Joivan Wade, Luna Lauren Velez, Marisa Tomei, Omari Hardwick, Lex Scott Davis, and Mo McRae.

A crazed drug addict named Skeletor talks on camera about his dark thoughts, including his desire to "purge" and unleash his hatred on other people. An unknown voice on the other end of the camera tells Skeletor that he will soon be able to.

Sometime in the mid-21st century, turmoil has caused the government to be overthrown by the New Founding Fathers of America (NFFA). NFFA members Arlo Sabian and Dr. May Updale announce an experiment to take place on Staten Island where for 12 hours, citizens will be allowed to purge and release their inhibitions in any way they choose. The NFFA offers residents of the Island $5000 to stay in their homes during the experiment and a compensation for those participating as well. They also outfit the participants with tracking devices and contact lenses with cameras in them so that they can monitor all activity. Drug lord Dmitri tells his dealers that they will be leaving but drug dealer Capital A wants to stay and purge. Another young drug dealer, Isaiah, gets into a fight with Skeletor and gets his neck cut. Isaiah goes to his sister Nya, an anti-Purge activist and Dimitri's ex-girlfriend, for treatment, and Nya later confronts Dmitri as she believes that Dmitri is Isaiah's drug lord, which he denies.

As people flee Staten Island on the night of the experiment, Nya joins her friends Dolores, Luisa, and Selina in a church to wait out the Purge. Dmitri has stayed behind because Capital A has sent Anna and Elsa, two sex workers, to his office. Skeletor commits the first-ever murder during the Purge, and the video recorded by the NFFA goes viral. The NFFA also observe that more parties than killings are taking place and that crimes are mostly just looting and vandalism, as opposed to the expected murder. Isaiah, unbeknownst to his sister, joins the Purge to get his revenge on Skeletor. He eventually confronts him during the Purge but cannot shoot him. Skeletor chases Isaiah throughout the streets but Isaiah manages to hide and he calls Nya to help. Anna and Elsa are revealed to be Purgers who attempt to kill Dmitri, but Dmitri fights them off and learns that Capital A had sent them in an attempt to take over Dmitri's business. Skeletor captures Nya in the streets and attempts to rape her, but Isaiah stabs him in the back and they escape.

Nya and Isaiah return to the church to see blood-soaked Purgers leaving it. They discover that Luisa and Selina survived, but Dolores' fate is unknown. They all return to Nya’s apartment where Dolores has made it safely. At the NFFA headquarters, Updale starts becoming suspicious due to the Purge's sudden change in the crimes committed, as well as the presence of masked participants. She reviews the video footage of the Purge and tracks where the vans of the masked killers came from. She discovers that these people are trained mercenary groups killing multiple civilians, including the ones at the church earlier. Sabian explains that he sent the mercenaries to make the experiment look successful, and eventually to help "balance" the rich and the poor. Updale protests this tampering of the experiment and informs Sabian her realization that NFFA only wants to eradicate the poor because they don't want to take care of them. With Sabian's corruption revealed, he has Updale taken away and killed, before erasing all footage of the event.

Capital A goes to Dmitri's office to see the results of Anna and Elsa's efforts, but Dmitri and his gang kill Capital A. Dmitri and his gang escape through the streets, killing multiple Purgers along the way, until NFFA drones shoot and kill Dmitri's gang. Dmitri calls Nya and warns her that the mercenaries are coming toward her apartment. Dmitri makes his way to the apartment, killing more mercenaries along the way. The mercenaries are about to shoot a rocket-propelled grenade into the apartments when Skeletor arrives and kills some mercenaries before he himself is killed. Dmitri grabs a piece of C-4, throws it and shoots it repeatedly until it explodes, killing the remaining mercenaries. As sirens sound the end of the Purge, Dmitri is hailed as a hero, and he states that the survivors must somehow fight back.

During the end credits, Sabian reads a statement calling this experimental Purge a success, and that a nationwide Purge may begin as soon as the following year. A mid-credits scene leads into the events of the other films, and directly ties into The Purge television series.

Retrieved from "https://movies.fandom.com/wiki/The_First_Purge?oldid=308411"
Community content is available under CC-BY-SA unless otherwise noted.