View src
watch 01:33
House of the Dragon Trailer - The Loop
Do you like this video?
Play Sound
The French Connection 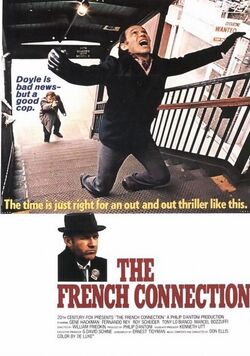 The French Connection is a 1971 American dramatic thriller film directed by William Friedkin and produced by Philip D'Antoni. It starred Gene Hackman, Fernando Rey and Roy Scheider. The film was adapted and fictionalized by Ernest Tidyman from the non-fiction book by Robin Moore. It tells the story of New York Police Department detectives named "Popeye" Doyle and Buddy "Cloudy" Russo, whose real-life counterparts were Narcotics Detectives Eddie Egan and Sonny Grosso. Egan and Grosso also appear in the film, as characters other than themselves.

It was the first R-rated movie to win the Academy Award for Best Picture since the introduction of the MPAA film rating system. It also won Academy Awards for Best Actor (Gene Hackman), Best Director, Best Film Editing, and Best Adapted Screenplay (Ernest Tidyman). It was nominated for Best Actor in a Supporting Role (Roy Scheider), Best Cinematography and Best Sound. Tidyman also received a Golden Globe Award, a Writers Guild of America Award and an Edgar Award for his screenplay.

In 2005, the film was selected for preservation in the United States National Film Registry by the Library of Congress as being "culturally, historically, or aesthetically significant."

The tale of NYC cop "Popeye" Doyle and his partner, "Cloudy" Russo. One day, they stumble upon a huge shipment of heroin from France. The trail leads to notorious drug kingpin, Alain Charnier. A huge success and a classic piece of seventies Hollywod cinema. The film made a star of Gene Hackman and also jettisoned Roy Scheider. Based on the true story of the two cops who would stop the drug trafficking between France and the US, it was a huge success, both financially and critically. The film won five Academy Awards, for Best Actor (Hackman), Best Screenplay, Best Director and Best Picture. Thus it would come close to winning the five big, but lacked a female main character. It also won for editing and features the best car chase of its time.

The film has a 98% rating on Rotten Tomatoes with the consensus saying, "Realistic, fast-paced, and uncommonly smart, The French Connection is bolstered by stellar performances by Gene Hackman and Roy Scheider, not to mention William Friedkin's thrilling production."