Start a Wiki
The Frozen Ground 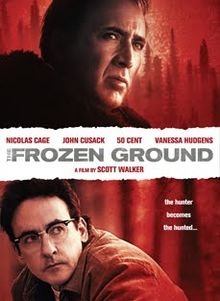 The Frozen Ground is an upcoming thriller film written and directed by Scott Walker based on the real-life 1980s Alaskan hunt for serial killer Robert Hansen who stalked and murdered between 17 and 21 young women, kidnapping them and taking them out to the Alaskan wilderness to turn them loose and hunt them.

The Frozen Ground is based on the true story of Alaskan detective Glenn Flothe (called Sgt. Jack Halcombe in the movie). Halcombe sets out to end the murderous rampage of Robert Hansen, a serial killer who has silently stalked the streets of Anchorage for more than 13 years. As the bodies of Anchorage women start to add up, Sgt. Halcombe goes on a personal manhunt to find the killer. When 17 year old Cindy Paulson escapes Hansen's unspeakable violence, she believes the law will take him down. Instead she finds herself, once again, fighting for her life. With her only ally, the unlikely Sgt. Halcombe, Paulson is determined to bring a serial killer to justice.

Retrieved from "https://movies.fandom.com/wiki/The_Frozen_Ground?oldid=48229"
Community content is available under CC-BY-SA unless otherwise noted.