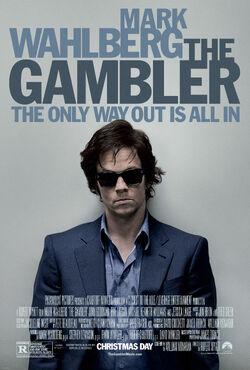 The Gambler is a crime drama film based on the 1974 film of the same name written by James Toback. It follows a literature professor with a gambling problem who runs afoul of gangsters.

Jim Bennett is a risk taker. Both an English professor and a high-stakes gambler, Bennett bets it all when he borrows from a gangster and offers his own life as collateral. Always one step ahead, Bennett pits his creditor against the operator of a gambling ring and leaves his dysfunctional relationship with his wealthy mother in his wake. He plays both sides, immersing himself in an illicit, underground world while garnering the attention of Frank, a loan shark with a paternal interest in Bennett’s future.

As his relationship with a student deepens, Bennett must take the ultimate risk for a second chance...

Retrieved from "https://movies.fandom.com/wiki/The_Gambler?oldid=119625"
Community content is available under CC-BY-SA unless otherwise noted.