watch 02:03
Wiki Targeted (Entertainment)
Do you like this video?
Play Sound
The Gentlemen 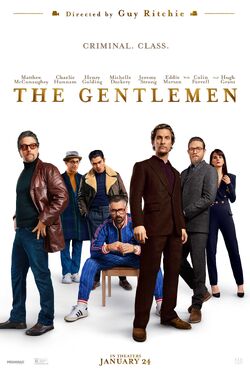 The film was released on January 24, 2020, by STX Entertainment.

The Gentlemen received generally positive reviews from critics. On Rotten Tomatoes, The film has a score of 74% based on 235 reviews with an average score of 6.44/10.

The Gentlemen "The New Gold Rush" Clip In Theaters January 24, 2020
Add a photo to this gallery
Retrieved from "https://movies.fandom.com/wiki/The_Gentlemen_(2019)?oldid=225234"
Community content is available under CC-BY-SA unless otherwise noted.