Start a Wiki
watch 01:27
The Loop (Movies)
Do you like this video?
The Grand Budapest Hotel 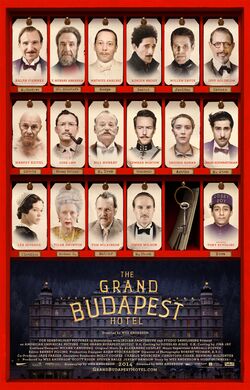 The Grand Budapest Hotel (2014) is an American-German comedy-drama film directed, written and produced by Wes Anderson. The screenplay by Anderson is from a story by Anderson and Hugo Guinness, inspired by the writings of Stefan Zweig. It stars Ralph Fiennes as a concierge who teams up with one of his employees (Tony Revolori) to prove his innocence after he is framed for murder.

The film is an American-German-British co-production that was financed by German financial companies and film-funding organisations. It was filmed in Germany. The Grand Budapest Hotel was released to widespread acclaim from film critics, and many included it in their year-end top 10 lists. The film led the BAFTA nominations, with 11 nominations, more than any other film, including Best Film and Best Director for Anderson, and Best Actor for Fiennes. The film won the Golden Globe Award for Best Motion Picture – Musical or Comedy and garnered three more Golden Globe Award nominations, including Best Director for Anderson. It also garnered nine Academy Award nominations, the joint most (with Birdman) at the 87th Academy Awards, including Best Picture and Best Director and won four for Best Production Design, Best Original Score, Best Costume Design and Best Makeup and Hairstyling

In the present, a teenage girl approaches a monument to a writer in a cemetery. In her arms is a memoir penned by a character known only as "The Author". She starts reading a chapter from the book. The Author begins narrating the tale from his desk in 1985 about a trip he made to the Grand Budapest Hotel in 1968.

Located in the Republic of Zubrowka, a fictional Central European state ravaged by war and poverty, the Young Author discovers that the remote mountainside hotel has fallen on hard times. Many of its lustrous facilities are now in a poor state of repair, and its guests are few. The Author encounters the hotel's elderly owner, Zero Moustafa, one afternoon, and they agree to meet later that evening. Over dinner in the hotel's enormous dining room, Mr. Moustafa tells him the tale of how he took ownership of the hotel and why he is unwilling to close it down.

The story begins in 1932 during the hotel's glory days when the young Zero was a lobby boy, freshly arrived in Zubrowka after his hometown was razed and his entire family executed. Zero acquires a girlfriend, Agatha, who is a professional pastry chef and proves very resourceful. Zubrowka is on the verge of war, but this is of little concern to Monsieur Gustave H., the Grand Budapest's devoted concierge. The owner of the hotel is unknown and only relays important messages through the lawyer Deputy Kovacs. When he is not attending to the needs of the hotel's wealthy clientele or managing its staff, Gustave courts a series of aging women who flock to the hotel to enjoy his "exceptional service". One of the ladies is Madame Céline Villeneuve "Madame D" Desgoffe und Taxis, with whom Gustave spends the night prior to her departure.

One month later, Gustave is informed that Madame D has died under mysterious circumstances. Taking Zero along, he races to her wake and the reading of the will, where Kovacs, coincidentally the executor of the will, reveals that in her will she has bequeathed to Gustave a very valuable painting, Boy with Apple. This enrages her family, all of whom hoped to inherit it. Her son, Dmitri Desgoffe und Taxis, lashes out at Gustave. With the help of Zero, Gustave steals the painting and returns to the Grand Budapest, securing the painting in the hotel's safe. During the journey, Gustave makes a pact with Zero: in return for the latter's help, he makes Zero his heir. Shortly thereafter, Gustave is arrested and imprisoned for the murder (by strychnine) of Madame D after forced testimony by Serge X, Madame D's butler, about seeing Gustave in her house on a particular night. Gustave tells Zero he has an alibi for that night but could never cite his aristocratic lady bedfellow in court. Upon arriving in prison, Gustave finds himself stuck in a cell with hardened criminals, but earns their respect after he "beat the shit" out of one of them for "challenging his virility".

Zero aids Gustave in escaping from Zubrowka's prison by sending a series of stoneworking tools concealed inside cakes made by Zero's fiancée Agatha. Along with a group of convicts including Ludwig, Gustave digs his way out of his cell with the help of the tools. The group narrowly escape capture after one of them sacrifices himself to kill a large posse of guards with his "throat-slitter" and Ludwig and his crew escape by car after wishing Gustave and Zero well. Gustave then teams up with Zero to prove his innocence.

Part 4 – The Society of the Crossed Keys

Gustave and Zero are pursued by J. G. Jopling, a cold-blooded assassin working for Dmitri, who chops off Kovacs' fingers on his right hand and kills him when he refuses to work with Dmitri. Gustave calls upon Monsieur Ivan, a concierge and fellow member of the Society of the Crossed Keys, a fraternal order of concierges who attempt to assist other members. Through the help of Ivan, Gustave and Zero travel to a mountaintop monastery where they meet with Serge, the only person who can clear Gustave of the murder accusations, but Serge is strangled by a pursuing Jopling before he can reveal a piece of important information regarding a second will from Madame D. Zero and Gustave steal a sled and chase Jopling as he flees the monastery on skis. During a face-off at the edge of a cliff, Zero pushes the assassin to his death and rescues Gustave.

Part 5 – The Second Copy of the Second Will

Back at the Grand Budapest, the outbreak of war is imminent, and the military have commandeered the hotel and are in the process of converting it into a barracks. A heartbroken Gustave vows to never again pass the threshold. Agatha joins the two and agrees to find a way to go inside - by delivering pastries - and retrieve the painting. Unluckily Dmitri comes at the same moment and discovers her. A chase and a chaotic gunfight ensue before Zero and Agatha flee with the painting (which had been hidden, still wrapped up, in the hotel safe). Gustave's innocence is finally proven by the discovery of the copy of Madame D's second will, which was duplicated by Serge before it was destroyed, and which he subsequently hid in the back of the painting. This will was to take effect only if she was murdered. The identity of Madame D's murderer and how Gustave is proved innocent are left ambiguous (though earlier in the film a suspicious bottle labeled "strychnine" can be seen on Jopling's desk). The will also reveals that she was the owner of the Grand Budapest. She leaves much of her fortune, the hotel, and the painting to Gustave, making him wealthy in the process, and he becomes one of the hotel's regular guests while appointing Zero as the new concierge. Zero and Agatha marry while Dimitri dissapears.

After the war, which it is implied Zubrowka lost, the country is annexed. During a train journey across the border, soldiers inspect Gustave's and Zero's papers. Zero describes Gustave being taken out and shot after defending Zero (whom the soldiers had attempted to arrest for his immigrant status), as he did on the initial train ride in the beginning of the movie. Agatha succumbs to "the Prussian Grippe" and dies two years later, as does her infant son. Zero inherits the fortune Gustave leaves behind and vows to continue his legacy at the Grand Budapest, but a subsequent Communist revolution in Zubrowka and the ravages of time slowly begin to take their toll on both the building and its owner as Zero is forced to "contribute" his entire inheritance to the government to keep the dying hotel in business. In a touch of irony, the painting Zero and Gustave fought so desperately to take now sits on a wall, forgotten and crooked.

Back in 1968, Mr. Moustafa confesses to the Author that the real reason that he cannot bring himself to close the hotel has nothing to do with his loyalty to Gustave, or as a connection to "his world," but because it is his last remaining link to his beloved Agatha and the best years of his life. He theorizes that Gustave's world was gone long before he was ever in it, but he maintained the illusion quite well. Before departing to his room, Mr. Moustafa gives the Author a key to the "M. Gustave Suite" and readjusts the crooked painting. The Young Author later departs for South America and never returns to the hotel.

In 1985, the Author completes his memoirs beside his grandson.

Back in the present, the girl continues reading in front of the statue of the Author, a sign that Zero and Gustave's story and that of the hotel will live on.

The Grand Budapest Hotel received widespread critical acclaim, particularly for the film's visual style, the humour, Anderson's directing and screenplay and Fiennes' lead performance. Film aggregator Rotten Tomatoes gives the film a 92% "Certified Fresh" rating, with an average score of 8.4/10, based on reviews from 257 critics. The consensus states: "Typically stylish but deceptively thoughtful, The Grand Budapest Hotel finds Wes Anderson once again using ornate visual environments to explore deeply emotional ideas." Metacritic reported a score of 88 out of 100, based on 48 critics, indicating "universal acclaim". Many ranked it one of the best films of 2014.

Retrieved from "https://movies.fandom.com/wiki/The_Grand_Budapest_Hotel?oldid=227939"
Community content is available under CC-BY-SA unless otherwise noted.