Start a Wiki
watch 01:27
The Loop (Movies)
Do you like this video?
The Green Knight 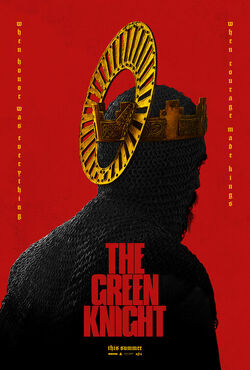 The Green Knight is an upcoming medieval fantasy film written and directed by David Lowery. It stars Dev Patel, Alicia Vikander, Joel Edgerton, Barry Keoghan, Ralph Ineson, Kate Dickie and Sean Harris. The story is based on the poem of Sir Gawain and the Green Knight.

A fantasy adventure based on the Arthurian legend, The Green Knight tells the story of Sir Gawain (Dev Patel), King Arthur's reckless and headstrong nephew, who embarks on a quest to confront the eponymous Green Knight, a gigantic green-skinned stranger.

Retrieved from "https://movies.fandom.com/wiki/The_Green_Knight?oldid=212566"
Community content is available under CC-BY-SA unless otherwise noted.