View src
watch 02:24
Wiki Targeted (Entertainment)
Do you like this video?
Play Sound
The Green Mile 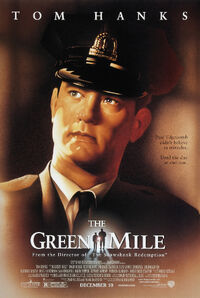 The Green Mile is a 1999 film, directed by Frank Darabont, based on the Stephen King novel The Green Mile. The film stars Tom Hanks as Paul Edgecomb and Michael Clarke Duncan as John Coffey.

The movie is primarily about Paul Edgecomb and his life as a prison guard on the death row in the 1930s. The movie is told in flashback by Paul Edgecomb in a nursing home and follows a string of supernatural and metaphysical events apon the arrival of tried and convicted murderer John Coffey.

In the 2000 Academy Awards the movie was nominated for four awards (Best Actor In A Supporting Role, Best Picture, Best Sound, Best Writing, Screenplay Based On hi Material Previously Produced or Published) but failed to win a single one.

The Green Mile is a story told in "flashback" by an elderly Paul Edgecomb in a nursing home. He tells a friend about the summer of 1935 when he was a prison guard in charge of death row inmates. His domain was called "The Green Mile" because the linoleum floor was green. The star of the cellblock was "Old Sparky", the electric chair, sitting peacefully, waiting for his next victim.

One day, a new inmate arrives. He is seven-foot-tall John Coffey, a black man convicted of raping and killing two young white girls. Coffey immediately shows himself to be a "gentle giant", keeping to himself and being moved to tears on occasion. Soon enough, Coffey reveals his extraordinary healing powers by healing Paul Edgecomb's urinary infection and bringing a mouse back from the dead.

At the same time, Percy Wetmore, a vicious, sadistic guard who takes pleasure in intimidating and injuring inmates, exasperates everyone else in the cellblock. However, he "knows people in high places," preventing Paul or anybody else from doing anything significant to curb his deviant behavior. What Percy wants is to be put "up front" for (i.e., in charge of) an execution; then, he promises, he will transfer himself to another government job and Paul will never hear from him again.

The Green Mile is, for the most part, faithful to Stephen King's original novel. There are, however, a few slight alterations.

The following is a list of filming locations, of which The Green Mile was shot on:

The following is a list of tracks featured in the film. Please note, that this does not include the tracks composed by Thomas Newman.

Wikiquote has a collection of quotations from or about:
The Green Mile (film)