Start a Wiki
The Grey 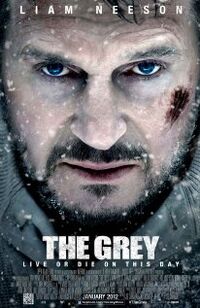 The Grey is an action thriller film, directed by Asa Axlerod and starring Liam Neeson, slated for theatrical release on January 27th, 2012. The story follows a number of men from an oil drilling team stranded in Alaska after a plane crash, and forced to survive using little more than their wits as a pack of wolves come after them.

In Anchorage Alaska, Ottway (Liam Neeson) patrols the surrounding area of the oil refinery providing protection for the refinery workers against wolves with his rifle. After his service is made, he boards a plane home after meeting some of the workers at the local bar. As the plane ventures home Ottway gets annoyed by one of the passengers and asks to let him get some sleep. after an unknown period of time, the plane begins to experience severe turbulence and later begins to shake violently, Ottway believes the plane will crash and takes survival into his own hands and straps in.

Ottway awakens to see the plane completely destroyed with only the refinery workers he met still alive, but with one with a serious injury. he tries to save him but realizes the injury the man took cant be saved. He finds he rifle destroyed. Ottway decides to salvage as many wallets as he can to bring back to loved ones of the deceased. John Diaz decides to loot them but is stopped by Ottway. Later that night the group set up camp in the wreckage while Ottway tries to search for anyone who may also survived. He finds a body moving, when he investigates his finds a large grey wolf feasting on it. he tries to scare it away but the wolf attacks him. the wolf is killed by the other survivors. Ottway returns to the camp to heal from a leg wound. after a funny conversation about Ottway turning into a wolf, a loud growl is heard outside the camp. Ottway and the group suddenly come in close contact with a large wolf seeing its eyes. Diaz wants to attack it but suddenly several more wolves appear which Ottway realizes they were being stalked by an entire pack. He tells the group it would be far too dangerous to try to venture out as they wont see the wolves. Ottway finds a group of trees in the distance and says that if they make it there the wolves might leave them alone.

They venture out, but are suddenly attacked by the wolves. Ottway and the other run to the tree line and set up fires to keep the wolves at bay. He fashions makeshft explosive spears using the buckshot shell from his rifle in case the wolves attack. Diaz believes that all this survival stuff is worthless and challenges Ottways skills. A fight ensues but is interrupted by a massive vicious black wolf mere feet away from Diaz. They stand their ground while Diaz backs away. Ottway finds out the black wolf is the Alpha and says that if the Alpha is killed the pack will scatter. Diaz regrets his mistake and decides to let Ottway lead. Diaz is suddenly attack by another wolf but its quickly killed by the group with their makeshift spears. Diaz thinks it's the leader but Ottway notices it's just an outcast (Omega) set in by the Alpha to test the power of the group. Diaz in a deranged state beheads the wolf and "returns" the wolf to the pack. the wolf pack howl a requiem but is quickly stopped by a vicious snarls from the Alpha.

Retrieved from "https://movies.fandom.com/wiki/The_Grey?oldid=163751"
Community content is available under CC-BY-SA unless otherwise noted.