Edit
watch 01:23
Wiki Targeted (Entertainment)
Do you like this video?
Play Sound
The Grudge 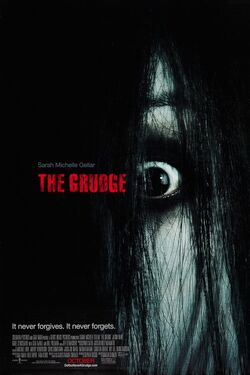 The Grudge is a 2004 supernatural horror film directed by Takashi Shimizu, written by Stephen Susco, and produced by Sam Raimi, Robert Tapert, and Takashige Ichise. A remake of Shimizu's 2002 Japanese horror film Ju-On: The Grudge, it stars Sarah Michelle Gellar, Jason Behr, KaDee Strickland, Clea DuVall, and Bill Pullman, and is the first installment in The Grudge film series which is based on the Japanese Ju-On franchise. Takako Fuji, Yuya Ozeki, and Takashi Matsuyama portray the characters Kayako Saeki, Toshio Saeki, and Takeo Saeki from the original films. The plot is told through a nonlinear sequence of events, and includes several intersecting subplots.

After the success of American remake of The Ring, Sony Pictures had green-lit an American remake of Ju-On: The Grudge. Shimizu, the writer and director of the original film, was hired to direct the film, from a screenplay written by Susco. Principal photography on ther film began on January 26, 2004 and wrapped in July 2004 in Tokyo, Japan.

The Grudge was released in North America on October 22, 2004, by Columbia Pictures. The film received mixed reviews, though Gellar's performance as Karen Davis was praised by critics, and was a box-office success, making over $187 million against a $10 million budget. The film was followed by two sequels, The Grudge 2 (2006) and The Grudge 3 (2009). A reimagining entitled The Grudge, which takes place concurrently with the events of this film, is set to be released in 2020.

The Grudge describes a curse that is born when someone dies in the grip of extreme rage or sorrow. The curse is an entity created where the person died. Those who encounter this supernatural force die, and the curse is reborn repeatedly, passing from victim to victim in an endless, growing chain of horror. The following events are explained in their actual order; however, the film is presented in a nonlinear narrative.

Kayako Saeki, a housewife living in suburban Tokyo, was in love with her college professor, Peter Kirk, and obsessively wrote about him in her diary. Her husband Takeo discovered the diary and believed that Kayako was having an affair with another man. He brutally murdered her, their young son Toshio, and the pet cat Mar in jealous rage. After Takeo hid the bodies in the house, Toshio's ghost killed him by hanging him.

After receiving a letter from Kayako, Peter came to the Saeki house only to find both her and Takeo's corpses and Toshio's ghost. Shocked, he fled and killed himself the next day. The remainder of the Saeki family rose again as ghosts due to the curse, notably Kayako, who appears as an onryō ghost.

A few years later, the Williams family from America move into the Saeki house. While Matt is thrilled with the house, his wife Jennifer and dementia-ridden mother Emma feel uncomfortable. Matt and Jennifer are quickly consumed by the curse. Yoko, a care worker, arrives at the house to find Emma alone. She encounters Kayako, who drags her up into the attic.

Concerned about Yoko's disappearance, her employer Alex sends another care worker, Karen Davis, to take over the care of Emma. At the house, Karen discovers Toshio sealed up in a wardrobe and later on witnesses Kayako's spirit descending from the ceilings to claim Emma.

Alex arrives at the house shortly after and finds Emma dead and Karen in a state of shock. He calls the police, including Detective Nakagawa. In the attic, Nakagawa and his partner Igarashi find Matt and Jennifer's bodies, along with a human's lower jaw. Meanwhile, Matt's sister, Susan, is pursued by Kayako around her office building. At home, Kayako attacks her and she vanishes. While leaving work, Alex is killed by Yoko's jawless corpse.

Kayako begins haunting Karen, who informs her boyfriend Doug of the situation. She researches the house, eventually confronting Nakagawa, who explains that three of his colleagues investigating the Saeki deaths were all consumed by the curse. That night, Nakagawa carries gasoline to the house in an attempt to burn it down, but is killed by Takeo.

After learning that Doug has ventured to the Saeki house to look for her, Karen races there. She finds a paralyzed Doug and attempts to flee with him. Kayako crawls down the stairs and latches onto Doug, who dies of shock. As Kayako closes in, Karen sees the gasoline and ignites it.

Karen survives and in the hospital, she learns that the house also survived the fire. Visiting Doug's body, Karen realizes that she is still haunted by Kayako.