Start a Wiki
The Grudge 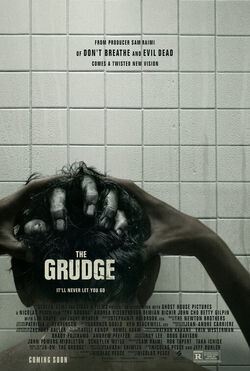 The Grudge is a 2020 American supernatural horror film written and directed by Nicolas Pesce, and produced by Sam Raimi, Rob Tapert, and Taka Ichise. A reboot of the 2004 American remake of the Japanese horror film Ju-On: The Grudge (both of which were directed by Takashi Shimizu), the film's events take place at the same time as those of the 2004 film, and is the fourth installment in The Grudge film series. The film stars Andrea Riseborough, Demián Bichir, John Cho, Betty Gilpin, Lin Shaye and Jacki Weaver.

A sequel was announced in 2011, with a release date of 2013 or 2014. In March 2014, it was officially announced that a reboot was in the works, with Jeff Buhler set to write the script. In July 2017, filmmaker Nicolas Pesce was hired for rewrites, based on Buhler's script, and to direct the film. Principal photography on the film began on May 7, 2018, in Winnipeg, Manitoba, and finished on June 23, 2018.

The Grudge was released in the United States on January 3, 2020, by Sony Pictures Entertainment.

Much like the original films, the film is told in a non-chronological order through several different storylines. The following events are explained in the actual order but this is not the order they are shown in the film.

In 2004, live-in nurse Fiona Landers leaves a house in Tokyo, disturbed by events she has witnessed inside. Fiona informs her co-worker Yoko that she is returning to America before encountering the ghosts of Kayako Saeki and Toshio. Fiona arrives at her home on 44 Reyburn Drive in a small town in Pennsylvania, reuniting with her husband Sam and daughter Melinda. Kayako’s curse, however, possesses Fiona, causing her to kill Sam and Melinda before committing suicide.

Detectives Goodman and Wilson investigate the murders. Unsettled by the house and crime, Goodman refuses to enter the house while Wilson enters to scope out the scene. Upon exiting, Wilson soon starts to lose his sanity and becomes hysterical when he spots Fiona’s ghost outside Goodman’s car; after which he attempts to commit suicide by shooting himself, but is unsuccessful. This leaves Wilson with a disfigured face and committed to a psychiatric asylum while Goodman stops looking into the case.

Some time later, real estate agents Peter and Nina Spencer learn that their unborn child will most likely be born with a rare genetic disorder ALD, distressing the pair. Peter goes to look into selling 44 Reyburn Drive and stumbles across Melinda’s ghost, presuming her to be a lost girl, who is bleeding profusely from her nose. Peter cares for her at the haunted house while Nina goes home. While on the phone with Peter, Nina agrees that they should keep their child.

Meanwhile, Peter is attacked by Fiona and Melinda’s ghosts before fleeing the house where he is quickly corrupted by the curse. The possessed Peter returns to his home, where he kills Nina and their unborn child before he is drowned in the bathtub.

In 2005, elderly couple Faith and William Matheson move into the house. Faith suffers from dementia, delusions and a terminal illness, causing William to call over Lorna Moody, an assisted suicide consultant. Faith is infected by the curse and starts to see Melinda around the house, her sanity rapidly declining.

Disturbed, Lorna suggests to William that they must leave the house but William reveals he is aware of the ghosts and suggests that it implies a future where people get to be with their loved ones in death. Lorna leaves and returns later to discover Faith has killed William and has sliced off her own fingers. Lorna flees in horror only to be attacked by Sam’s ghost in her car and crashes, killing her.

In 2006, rookie detective Muldoon moves to town with her son Burke following her husband’s death from cancer. Muldoon and Goodman are called to the woods where Lorna’s corpse has been discovered. Noticing Goodman’s discomfort at the revelation that she had been visiting 44 Reyburn Drive, Muldoon questions him about the house where he reveals his suspicions the house is cursed, and he wants nothing to do with it.

Muldoon goes to the house, discovering a disoriented Faith and William’s corpse. Faith is taken to a hospital where she throws herself off a balcony, killing herself. Meanwhile, as Muldoon continues her research into the case, she is haunted by the ghosts of the Landers. Afterwards, Muldoon visits Wilson in the asylum, who tells her that all people who enter the haunted house will also be haunted and suffer from hallucinations, including her. As Muldoon is leaving the asylum, Wilson gouges out his eyes.

Fearful for her safety, Muldoon confides in Goodman and learns that the curse is also happening in Japan and that Fiona is the one who accidentally bought it over abroad. After she and Burke are attacked by the Landers ghosts again, Muldoon goes to 44 Reyburn Drive and burns the house to the ground as she is besieged by hallucinations and tricks.

The ghosts are set on fire and the house burns to the ground as Muldoon embraces Burke. Sometime later, Muldoon goes to hug Burke before he goes to school only to see another Burke leave the house as she hugs Burke. The "Burke" she’s hugging is revealed to be Melinda before Muldoon is dragged away by Fiona's ghost. The credits roll over a silent shot of Muldoon's home; the same home where the Spencers died, and now a new extension of the curse.

Retrieved from "https://movies.fandom.com/wiki/The_Grudge_(2020)?oldid=200585"
Community content is available under CC-BY-SA unless otherwise noted.