View src
watch 01:33
Wiki Targeted (Entertainment)
Do you like this video?
Play Sound
The Grudge 2 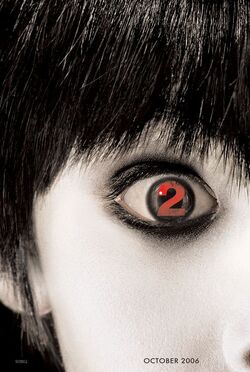 The Grudge 2 is a 2006 supernatural horror film and a sequel to the 2004 film, The Grudge. Produced by Sam Raimi, the film was directed by Takashi Shimizu, written by Stephen Susco and stars an ensemble cast that includes Amber Tamblyn, Arielle Kebbel, Jennifer Beals, Edison Chen, Sarah Roemer, and Sarah Michelle Gellar.

As stated by Takashi Shimizu, the film is not a remake of any Japanese film and follows a different storyline. Like its predecessor, the film features a plot that is told through a non-linear sequence of events and includes several intersecting subplots. The three main subplots include: Karen's younger sister Aubrey coming to Japan after finding out about Doug's death, a schoolgirl named Allison being hunted by the ghosts after entering the house with two of her classmates and a young boy named Jake whose apartment building is haunted by the ghosts of the Saeki family.

The film was announced after the release of the previous film in October 2004, due to its financial success. Shimizu was announced to return as director on January 2005 and casting begun on December, with the announcement of Gellar returning. The film was entirely shot in Japan, with Tamblyn performing re-shoots in Chicago, Illinois.

The Grudge 2 was theatrically released in the United States on October 13, 2006, by Columbia Pictures. The film received generally negative reviews, and made over $70 million worldwide against a $20 million budget. A sequel, The Grudge 3 was released direct-to-video on May 12, 2009.

The film's chronology is told in a non-linear fashion, taking place in 2004 and 2006 respectively.

In the previous film, American social worker Karen Davis tried to burn down the Saeki house to stop the curse, but failed, finding herself hospitalised and haunted by Kayako.

Aubrey, Karen's younger sister, goes to Tokyo to retrieve her. In Japan, Aubrey struggles to communicate with the hospital staff but a journalist named Eason aids her. Aubrey briefly speaks with Karen, who panics and has to be restrained. Karen is later killed by Kayako in front of Aubrey and Eason. Eason explains the curse to Aubrey, revealing he rescued Karen from the house fire, and has been investigating the Saeki murders and surrounding events. The two go to the house to retrieve Kayako's diary, but Toshio drags Aubrey inside to curse her.

Eason takes the diary to an associate, who explains Kayako's mother was an itako who exorcised evil spirits from visitors and fed them to her daughter. Eason and Aubrey make plans to visit Kayako's mother. As Eason develops photographs he took of the Saeki house, Kayako emerges from a photo and murders him. After discovering his body, Aubrey travels alone to Kayako's mother's remote rural home. Kayako's mother warns her the curse is irreversible before being killed by her daughter. Aubrey ventures to the house, following an image of Karen inside. She encounters Takeo's ghost, who reenacts the night he discovered his wife's disloyalty, and snaps Aubrey's neck.

Two years later, school girls Allison Fleming, Vanessa, and Miyuki, break into the house on a dare but Allison is locked in the closet and encounters Aubrey's ghost but the girls escape. After Miyuki and Vanessa are consumed by the curse, Allison speaks with school counsellor Ms. Dale about the curse, but Dale denies its existence, revealing she went to the house and is actually a ghost herself. Allison is haunted by the ghosts of her friends, and she eventually flees back to Chicago, where she stays with her parents.

The Kimbles move into an apartment block in Chicago. A young boy named Jake is disturbed by a strange presence in the building brought about by a hooded stranger who covers windows with newspaper. Jake's father Bill and stepmother Trish are influenced by the curse, Bill accusing his wife of having an affair but she bludgeons him with a frying pan. Jake and his sister Lacey return from school, but Jake finds his family are all dead. He runs into the hooded person, revealed to be Allison, who explains the curse followed her. Kayako appears in Allison's hood, finally taking her, and then emerges to attack Jake.