Edit
watch 01:23
Wiki Targeted (Entertainment)
Do you like this video?
Play Sound
The Grudge 3 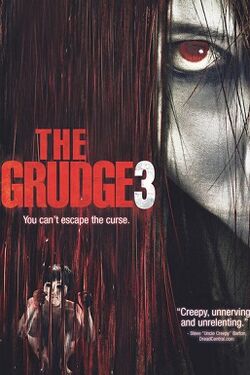 The Grudge 3 is a 2009 supernatural horror film and the third installment in The Grudge film series. Toby Wilkins, who had previously directed the successful film Splinter and the short film series Tales from the Grudge, took Takashi Shimizu's place as director who later served as executive producer, while Brad Keene replaced Stephen Susco as screenwriter.

The film stars Johanna Braddy, Gil McKinney, Emi Ikehata, Jadie Rose Robson, Beau Mirchoff and Shawnee Smith, with a special appearance by Matthew Knight (from The Grudge 2). Aiko Horiuchi and Shimba Tsuchiya plays Kayako and Toshio in the film, with Takashi Matsuyama being the only actor reprising his role from the previous films.

Unlike the previous American films that were both rated PG-13, The Grudge 3 was given an R rating because of its graphic bloody violence, gore and language. The film features a linear plotline unlike all of its predecessors, which used nonlinear sequences of events for their respective plots and subplots.

The Grudge 3 was released on DVD on May 12, 2009, by Sony Pictures Home Entertainment. It received mixed to negative reviews from critics and grossed $38 million against a $5 million budget.

Jake Kimble (the only survivor from the second film) is under the care of Dr. Sullivan in an asylum. He is locked in his room following several escape attempts and is attacked by Kayako. The attack is seen on security cameras, although Kayako cannot be seen, and Jake is dead by the time Sullivan arrives with a security officer. News of the incident reaches a young woman in Tokyo, Naoko, who is the sister of Kayako. Believing that her sister is responsible, she travels to Chicago.

The apartment building where Jake lived is under renovation. Of the few residents who remain, some glimpse Toshio. One is drowned by Takeo Saeki and is never again seen. Sullivan, while investigating Jake's death, speaks with residents and finds that others have seen the little boy of whom Jake spoke. Sullivan digs more into the information and is killed by Kayako.

Naoko moves in as attacks continue against the residents and anyone associated with them. She tells the landlord's family that the curse now resides in the apartment and tries to convince them to participate in an exorcism. The landlord's sister, Lisa, refuses to cooperate but reconsiders when she realizes that her brother, Max, is possessed by the spirit of Takeo Saeki, the evil husband of Kayako and the source of the curse. Naoko warns that the ceremony must not be interrupted and tells Rose that she must drink Kayako's blood. Lisa disallows this. Takeo, as Max, realizes what Naoko is attempting and attacks and kills her. Lisa is chased by Kayako until, just as Kayako is about to kill Lisa, Rose drinks Kayako's blood which causes her curse to disappear.

Max, who has been exorcized of Takeo's evil possession upon Kayako's banishment, stares in horror at the body of Naoko, but her murder has begun a new curse. Her ghost attacks and kills him. The film ends with Kayako shown to be in possession of Rose.