View src
watch 02:24
Wiki Targeted (Entertainment)
Do you like this video?
Play Sound
The Happytime Murders 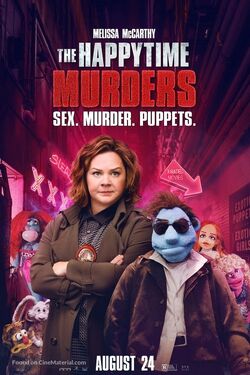 The Happytime Murders is a 2018 American action crime mystery black comedy thriller film directed by Brian Henson and written by Todd Berger. The film stars Melissa McCarthy, Bill Barretta, Maya Rudolph, Joel McHale, and Elizabeth Banks. It is scheduled to be released by STXfilms on August 24, 2018.

The film was first announced in 2008 by The Jim Henson Company, the production studio of Muppets creator Jim Henson. Various actors, including Cameron Diaz, Katherine Heigl, and Jamie Foxx, were approached to star before McCarthy signed on in May 2017. Filming began in Los Angeles that September, and involved the use of over 120 puppets. The release marks the film debut of Henson Alternative, a banner of The Jim Henson Company that specializes in adult content.

The Happytime Murders was released on August 24, 2018, by STXfilms. It received generally unfavorable reviews from critics, who felt that it "waste[d] its intriguingly transgressive premise." It is considered to be the one of the worst films ever made.

A director's cut titled Brain Henson's The Happytime Murders, is in development.

Puppets coexist with humans, but are reviled by society and considered inferior. Puppet private investigator Phil Philips (Bill Barretta) reunites with his ex-partner Detective Connie Edwards (Melissa McCarthy) to find a serial killer who murdered Phil's brother. The killer is now targeting the retired cast members of the 1980s television series The Happytime Gang, and Phil's former flame, Jenny (Elizabeth Banks), is next on the list.

Announced in 2008 as being in development at The Jim Henson Company, the film was picked up two years later by Lionsgate with a targeted January 2011 start date. At the time, Cameron Diaz had been offered a lead role in the film. Diaz dropped out and Katherine Heigl entered into talks to replace her.

In July 2015, it was announced that STX Entertainment had picked up the film rights to The Happytime Murders (Lionsgate having lost them) and put the film in active development with script revisions by Erich and Jon Hoeber. In April 2016, Jamie Foxx entered negotiations to star in the film. In May 2017, it was revealed that Melissa McCarthy had signed on to star in the film as well as contribute minor, uncredited rewrites of the film's screenplay. This was followed by Maya Rudolph being added in August and in September, Elizabeth Banks, puppeteer Bill Barretta, and Joel McHale all officially joined the cast.

Principal photography on the film began in Los Angeles, California on September 11, 2017.

There are a total of 125 puppets in the film, with 40 specifically created for it. To accommodate the puppeteers, all of the sets were built up so that the puppeteers could stand on the floor, since their optimum way to operate the puppets is if they are standing with straight arms. Because the floor of the sets came up in pieces, the human actors had a two-foot margin to stay on their path.

The first official red-band trailer was released on May 18, 2018, with select screenings of Deadpool 2.

In the United States and Canada, The Happytime Murders was released alongside A.X.L., and was projected to gross $13–15 million from 3,225 theaters in its opening weekend. The film made $950,000 from Thursday night previews, better than the $700,000 made by McCarthy's Life of the Party three months prior. It went on to debut to just $10 million, marking the lowest solo opening of McCarthy's career.

On review aggregator Rotten Tomatoes, the film holds an approval rating of 22% based on 137 reviews, with an average rating of 3.9/10. The website's critical consensus reads, "The Happytime Murders wastes its intriguingly transgressive premise on a witless comedy that blindly pushes buttons instead of attempting to tell an entertaining story." On Metacritic, the film has a weighted average score of 27 out of 100, based on 40 critics, indicating "generally unfavorable reviews". Audiences polled by CinemaScore gave the film an average grade of "C–" on an A+ to F scale, the lowest of McCarthy's career, while PostTrak reported filmgoers gave it an "awful" 58% overall positive score.

In May 2018, Sesame Workshop, the organization behind the production of the television series Sesame Street, filed a lawsuit against STX Productions for using their trademark in a film they have no involvement with, including the tagline "No Sesame, all Street." They alleged that associating a children’s program with an adult comedy would smear the former’s reputation as well as confuse individuals. In response, STX issued a statement indicating their persistence to keep the marketing for the film unchanged. On May 30, 2018, the lawsuit was rejected by the presiding judge for the case, with STX issuing a brief statement soon thereafter:

"We fluffing love Sesame Street and we're obviously very pleased that the ruling reinforced what STX's intention was from the very beginning — to honor the heritage of The Jim Henson Company's previous award-winning creations while drawing a clear distinction between any Muppets or Sesame Street characters and the new world Brian Henson and team created. We believe we accomplished that with the very straightforward NO SESAME, ALL STREET tagline. We look forward to continued happytimes as we prepare to release Happytime Murders this summer."

Some TV spots for the film have since made references to the lawsuit by starting the ads with "From the studio that was sued by Sesame Street..."