Start a Wiki
The Help 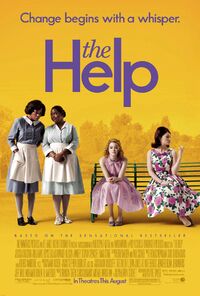 Change begins with a whisper
Directed By
Tate Taylor
Written By
Tate Taylor (screenplay), Kathryn Stockett (novel)
Country
United States
Release Date
10 August 2011 (USA)
Runtime
146 mins
Gross
$169,224,625 (USA) (11 December 2011)
The Help is a 2011 comedy-drama film based on the novel by the same name. It stars Emma Stone as a journalist who writes a controversial book based on research of her relationships with maids in the early 1960s in the South, and Viola Davis as one of the maids.

Retrieved from "https://movies.fandom.com/wiki/The_Help?oldid=169842"
Community content is available under CC-BY-SA unless otherwise noted.