The Hobbit: An Unexpected Journey

The Hobbit: An Unexpected Journey

The Lord of the Rings: The Return of the King

The Hobbit: The Desolation of Smaug
The Hobbit: An Unexpected Journey is a 2012 epic fantasy adventure film directed by Sir Peter Jackson. It is the first installment in a three-part film adaptation based on the 1937 novel The Hobbit by J. R. R. Tolkien. It is followed by The Desolation of Smaug (2013) and The Battle of the Five Armies (2014), and together they act as a prequel to Jackson's The Lord of the Rings film trilogy. The film's screenplay was written by Peter Jackson, his longtime collaborators Fran Walsh and Philippa Boyens, and Guillermo del Toro, who was originally chosen to direct the film before leaving the project in 2010.

The story is set in Middle-earth sixty years before the events of The Lord of the Rings, and portions of the film are adapted from the appendices to Tolkien's The Return of the King. An Unexpected Journey tells the tale of Bilbo Baggins (Martin Freeman), who is convinced by the wizard Gandalf the Grey (Ian McKellen) to accompany thirteen Dwarves, led by Thorin Oakenshield (Richard Armitage), on a quest to reclaim the Lonely Mountain from the dragon Smaug. The ensemble cast also includes James Nesbitt, Ken Stott, Cate Blanchett, Ian Holm, Christopher Lee, Hugo Weaving, Elijah Wood and Andy Serkis, and features Sylvester McCoy, Barry Humphries and Manu Bennett.

An Unexpected Journey premiered on November 28, 2012 in New Zealand and was released internationally on December 12, 2012. The film has grossed over $1 billion at the box office, surpassing both The Fellowship of the Ring, The Two Towers and The Desolation of Smaug and The Battle of the Five Armies, becoming the highest-grossing movie of The Hobbit franchise, the fourth highest-grossing film of 2012, the second highest-grossing entry in the Middle-earth Saga and the 18th highest grossing film of all time and the 7th fantasy film to reach the $1 billion mark. The film was nominated for three Academy Awards for Best Visual Effects, Best Production Design, and Best Makeup and Hairstyling. It was also nominated for three BAFTA Awards.

An Unexpected Journey was also nominated for nine Saturn Awards, winning one for Best Production Design.

Approaching his 111th birthday, the hobbit Bilbo Baggins begins writing down the full story of his adventure 60 years earlier for the benefit of his nephew Frodo. Long before Bilbo's involvement, the Dwarf king Thrór brings an era of prosperity for his kin under the Lonely Mountain until the arrival of the dragon Smaug. Destroying the nearby town of Dale, Smaug drives the Dwarves out of their mountain and takes their hoard of gold. Thrór's grandson Thorin sees King Thranduil and his Wood-elves on a nearby hillside, and is dismayed when they take their leave rather than aid his people, resulting in Thorin's everlasting hatred of Elves.

In the Shire, 50-year-old Bilbo is tricked by the wizard Gandalf the Grey into hosting a party for Thorin and his company of dwarves: Balin, Dwalin, Fíli, Kíli, Dori, Nori, Ori, Óin, Glóin, Bifur, Bofur, and Bombur. Gandalf's aim is to recruit Bilbo as the company's "burglar" to aid them in their quest to enter the Lonely Mountain. Bilbo is unwilling to accept at first but has a change of heart after the company leaves without him. Travelling onward, the company is captured by three trolls. Bilbo stalls the trolls from eating them until dawn. Gandalf exposes the trolls to sunlight turning them to stone. They search the trolls' cave and find treasure and Elven blades. Thorin and Gandalf each take an Elf-made blade—Orcrist and Glamdring, respectively. Gandalf also finds an elven shortsword ("Sting"), which he gives to Bilbo.

The company meets the wizard Radagast the Brown, who tells them of an encounter at Dol Guldur with the Necromancer, a sorcerer who has been corrupting Greenwood with dark magic. The company is then chased by orcs on wargs. Radagast covers the company's escape as Gandalf leads the company through a stone passage to Rivendell. There, Lord Elrond discloses a hidden indication of a secret door on the company's map of the Lonely Mountain, which will be visible only on Durin's Day. Gandalf later approaches the White Council—consisting of Elrond, Galadriel and Saruman the White—about his involvement with the dwarves. He also presents a Morgul blade Radagast obtained from Dol Guldur as a sign that the Necromancer is linked to the Witch-king of Angmar, despite Saruman's skepticism. When Saruman presses concern to the more present matter of the dwarves and Smaug, requesting that Gandalf put an end to the quest, Gandalf secretly reveals to Galadriel he had anticipated this and had the dwarves move forward on their quest without him.

The company journeys into the Misty Mountains where they find themselves amid a colossal battle between stone giants. They take refuge in a cave and are captured by Goblins, who take them to their leader, the Great Goblin. Bilbo becomes separated from the dwarves and falls into a cave where he encounters Gollum, who accidentally drops a golden ring while killing a stray goblin to eat. Pocketing the ring, Bilbo finds himself confronted by Gollum. They play a riddle game, wagering that Bilbo will be shown the way out if he wins or eaten by Gollum if he loses. Bilbo eventually wins by asking Gollum what he has in his pocket. Noticing his ring is lost, Gollum suspects that Bilbo possesses it and attacks him. Bilbo discovers that the ring grants him invisibility, but when he has a chance to kill Gollum, Bilbo spares his life and escapes while Gollum curses the hobbit.

Meanwhile, the Great Goblin reveals to the dwarves that Azog, an Orc war-chief who beheaded Thrór and lost his forearm to Thorin in battle outside the Dwarven kingdom of Moria, has placed a bounty on Thorin's head. Gandalf arrives and leads the dwarves in an escape and kills the Great Goblin. Bilbo exits the mountain and rejoins the company, keeping secret his newly obtained ring. The company is ambushed by Azog and his hunting party, and takes refuge in trees. Thorin charges at Azog, but is knocked unconscious and left defenseless on the ground. Bilbo saves Thorin from the orcs just as the company is rescued by eagles. They escape to the safety of the Carrock where Gandalf is able to revive Thorin, who renounces his previous disdain for Bilbo after being saved by him. In the distance, the company sees the Lonely Mountain, where the sleeping Smaug is awakened by the knocking sound of a thrush. 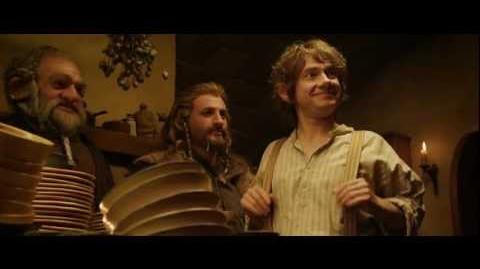 The film received positive reviews, with critics praising the film itself, particulary for its visuals, Peter Jackson's return to Middle-earth and the performances of the cast, especially that of Martin Freeman, but criticized it for its long running time of 169 minutes. The film holds a rating of 64% "Fresh" on Rotten Tomatoes, while the film received mixed reviews on Metacritic with a rating of 58 out of 100.