Start a Wiki
watch 01:38
The Loop (Movies)
Do you like this video?
The Hobbit: The Desolation of Smaug 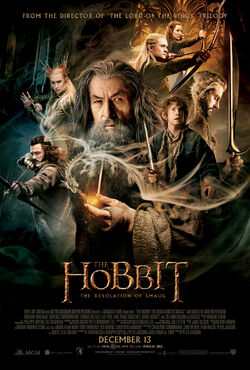 Directed By
Peter Jackson
Produced By
Written By

The Hobbit: The Desolation of Smaug is an upcoming film, to be the second part of The Hobbit movie series. It is scheduled for release on December 13, 2013. The Hobbit: Battle of Five Armies was one of the two earlier proposed titles for this film.

The sequel to The Hobbit: An Unexpected Journey, the film is to follow the journey through Mirkwood, Laketown, and into Smaug's Lair. The Hobbit: There and Back Again is set to conclude the trilogy.

The film will take Thorin and Company to Beorn's house, through Mirkwood and into Smaug's lair.

The film is named after the dragon Smaug and the wastes surrounding his home.

Most of filming has been finished during 2012, ending on July 2012, but during May 2013, additional shooting for the film and the sequel began in New Zealand, which is set to last 10 weeks.

The musical score for The Desolation of Smaug was composed by Howard Shore. It will be performed by the New Zealand Symphony Orchestra. The original motion picture soundtrack album is expected to release in late 2013, to coincide with the film's release.

Peter Jackson has provided the first details about the second film in the series at a live event held on 24 March 2013. The access code was attached to the DVD editions of The Hobbit: An Unexpected Journey. The live-broadcast event revealed some plot details; Jackson said that the role of Tauriel, acted by Evangeline Lilly, is a part of the elven guard and a bodyguard of the Elvenking, Thranduil. In addition, he revealed a scene from the film in which Gandalf and Radagast the Brown search for the Necromancer fortress and discover that the Ringwraiths have been released from their graves.

The film is set to be released worldwide on 13 December 2013. As part of an agreement between Warner Bros and New Line Cinema, the premiere of the film will not be held in Wellington, New Zealand, as it was for the previous film in the series.

Retrieved from "https://movies.fandom.com/wiki/The_Hobbit:_The_Desolation_of_Smaug?oldid=64562"
Community content is available under CC-BY-SA unless otherwise noted.