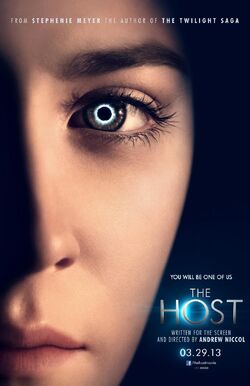 The Host is an upcoming film adaptation of Stephenie Meyer's novel of the same name directed by Andrew Niccol. It is set to be released on March 29, 2013.

Melanie Stryder, one of the last humans putting up a fight against an alien species called Souls. These parasites invade human bodies, fuse to each person's consciousness and systematically erase their personalities. Melanie is captured by the aliens and implanted by a Soul called Wanderer, something of a legend because of all of the "hosts" she has attached to on numerous planets. Wanderer's goal is to get Melanie to give up the remaining pockets of humans, but instead the alien finds Melanie to be unique in her unwillingness to surrender her consciousness. Wanderer is so overwhelmed by Melanie's memories and feelings, the alien is driven to reconnect with Melanie's old life. 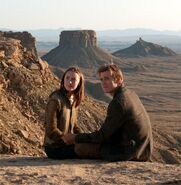 Retrieved from "https://movies.fandom.com/wiki/The_Host_(2013)?oldid=85036"
Community content is available under CC-BY-SA unless otherwise noted.