Start a Wiki
watch 01:27
The Loop (Movies)
Do you like this video?
The House with a Clock in Its Walls 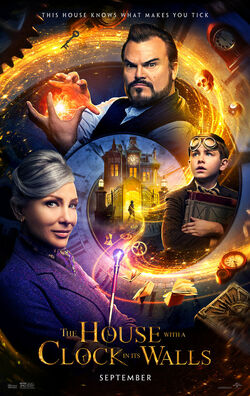 The House with a Clock in Its Walls is a 2018 American fantasy comedy film directed by Eli Roth. The cast of the film consists of Jack Black, Cate Blanchett, Owen Vaccaro, Renée Elise Goldsberry, Sunny Suljic, and Kyle MacLachlan.

In 1955, ten-year-old Lewis Barnavelt goes to New Zebedee, Michigan to live with his uncle Jonathan in a creaky old house which has a mysterious ticking heart. Recently orphaned, Lewis only wants a normal childhood but soon discovers he is in line for anything but that. Uncle Jonathan is a well-intentioned warlock but, in his own description, only a parlor magician of modest ability, while his next-door neighbor and good friend, Florence Zimmerman, was once a far more powerful good witch. Years ago, something broke inside her causing all her spells to go wrong. The house that Lewis has just moved into was previously owned by Isaac and Selena Izard. Before dying, this sinister couple had constructed a powerful clock that is hidden somewhere within the house's walls, ticking eternally to pull the world into a magical alignment that would permit Isaac to bring about the end of the world. When Lewis, wanting only to befriend and impress the popular Tarby Corrigan, attempts to raise a dead person in the local cemetery on Halloween, he accidentally releases Isaac Izard from his tomb. Things quickly go awry as Isaac Izard moves to recover the key and set the clock in motion to end the world. Now, with help from Jonathan and Mrs. Zimmerman, they must summon all their courage to prevent the evil warlock, Isaac Izard from completing his task.

Retrieved from "https://movies.fandom.com/wiki/The_House_with_a_Clock_in_Its_Walls?oldid=136519"
Community content is available under CC-BY-SA unless otherwise noted.