Start a Wiki
watch 01:27
The Loop (Movies)
Do you like this video?
The Hudsucker Proxy 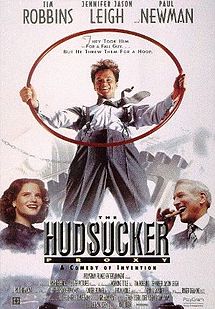 The Hudsucker Proxy is a 1994 screwball comedy film directed by Joel and Ethan Coen, telling a fictitious story about the rise and fall of a naive executive and the invention of the hula hoop. It stars Tim Robbins, Paul Newman, and Jennifer Jason Leigh. One of the film's narrative devices is repeated reference to the Wheel of Fortune.

Retrieved from "https://movies.fandom.com/wiki/The_Hudsucker_Proxy?oldid=124541"
Community content is available under CC-BY-SA unless otherwise noted.