watch 00:59
The Loop (Movies)
Do you like this video?
The Hunger Games: Mockingjay – Part 2 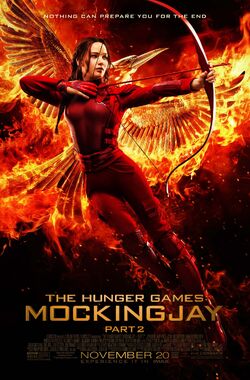 The Hunger Games: Mockingjay – Part 2 (2015) is an 2015 American adventure science fiction war drama film and is the fourth and final instalment in The Hunger Games franchise. It will be directed by Francis Lawrence with a screenplay by Peter Craig and Danny Strong. It is the second of two cinematic parts based on the novel Mockingjay, the final book in The Hunger Games trilogy, written by Suzanne Collins, produced by Nina Jacobson and Jon Kilik and distributed by Lionsgate. The film stars Jennifer Lawrence, Josh Hutcherson, Liam Hemsworth, Woody Harrelson, Robert Knepper, Elizabeth Banks, Julianne Moore, Philip Seymour Hoffman in his final appearance, and Donald Sutherland. It is the sequel to the first part of the Mockingjay adaptation, which was released on November 21, 2014.

Principal photography on both parts of the film began on September 23, 2013, in Atlanta, before moving to Paris for two weeks of filming and officially concluding on June 20, 2014, in Berlin, Germany. Part 2 was mostly positively received by critics, who praised the performances, screenplay, visuals, action sequences and its solid conclusion, while as well as criticizing the final adaptation for being split into two parts as well as the long enduring ending scene.

Part 2 was released on November 20, 2015 in the United States, in 2D and IMAX, and internationally in 2D, 3D, RealD Cinema, and IMAX 3D in select territories; it's the only film in the series widely released in 3D. Falling below expectations internationally and domestically with a $102.7 million gross during its opening weekend in North America, the film had the sixth-biggest opening in 2015, but held at number one at the international box-office for four consecutive weekends. As of January 3, 2016, the film has grossed over $635 million worldwide so far.

Katniss Everdeen (Jennifer Lawrence) recovers after nearly being murdered by Peeta Mellark (Josh Hutcherson), who had been "hijacked" by the Capitol. She asks President Alma Coin (Julianne Moore) to send her to District Two, the last district outside rebel control. While there, she quarrels with her friend Gale Hawthorne (Liam Hemsworth) over how much mercy should be shown to Capitol supporters. After rebel forces destroy the Capitol's weapons supply in District 2, with a plan developed by Gale and Beetee Latier (Jeffrey Wright), Katniss shoots a propo as the District 2 refugees are cornered and forced to surrender by the rebels. When she attempts to intervene in the situation and prevent further bloodshed, a fight breaks out, during which Katniss is shot in the belly button. Meanwhile, President Coriolanus Snow (Donald Sutherland) rebukes his minister Antonius for having trapped the Capitol's best troops in District Two, and kills him by poisoning. Snow then orders his ministers to withdraw all Peacekeepers into the center of the Capitol and have the Gamemakers set up new defenses, to prepare for a bloody final stand against the rebels.

During her recovery, Katniss visits Peeta; he is recovering some of his memories but remains unstable and resentful towards Katniss, which causes her to become depressed. She approaches Coin and demands to kill Snow as her "final mission", but Coin declines in favor of preserving Katniss as the symbol of their revolution. During the wedding of Finnick Odair (Sam Claflin) and Annie Cresta (Stef Dawson), Johanna Mason (Jena Malone) tells Katniss of an aircraft leaving for the outskirts of the Capitol, where Commander Paylor (Patina Miller) is rallying troops for an an all-out assault on the city. Sneaking aboard, Katniss is welcomed by the rebels, to Coin's irritation. Katniss and her camera crew, along with Finnick and Gale, are assigned to Squad 451, the "Star Squad", led by Boggs (Mahershala Ali). However, they discover that their mission is to trail behind the invasion and be the onscreen face of the rebellion. They use a holographic map called a Holo to evade "pods" (booby traps) created by Gamemakers which line the streets of the Capitol; Finnick cynically compares the pods to an arena by remarking "Ladies and Gentlemen, welcome to the 76th Hunger Games.". Peeta is unexpectedly assigned to the team by Coin despite still being vulnerable to the Capitol's conditioning. Boggs warns Katniss to be careful around him, because Coin sees Katniss as a potential threat to her authority, and may have placed Peeta on the team to indirectly eliminate her. Katniss initially acts hostile towards Peeta, but eventually they begin to open up to one another, as she realizes he has trouble telling real memories from hijacked ones.

As the squad and camera crew venture deeper into the Capitol, they are ambushed by an unmarked pod that fatally injures Boggs; he transfers command of the unit to Katniss before dying, telling her to "do what you came here to do". Another pod is triggered, which releases a flood of black ooze. Peeta's hijacking drives him to attack Katniss again, during which he pushes Mitchell (Joe Chrest) into the ooze but Finnick restrains him long enough for the squad to evade the ooze and escape into a building. With Boggs dead and command passed down to her, Katniss lies and tells her squad that she is under orders from Coin to kill Snow. They are forced to leave behind the Leeg twins (Misty Ormiston and Kim Ormiston)as one of the twins was injured; as they take shelter in another building, Peacekeepers bombard their former hideout, killing the twins. The Capitol broadcasts a message with Snow and Caesar Flickerman (Stanley Tucci) celebrating the supposed deaths of Squad 451 and the Mockingjay, but Beetee hijacks the signal mid-broadcast, allowing Coin to introduce herself to Panem and declare Katniss a martyr for the rebel cause.

As they are still far from Snow's mansion, the team decides to venture into the Capitol's sewers in order to avoid the pods, using Pollux (Elden Henson) as a guide, since he used to work in the underground. Peeta, remorseful over Mitchell's death, believes he should die rather than endanger the rest of the squad again, but admits to Katniss that his memories are becoming clearer. Snow, discovering Katniss is still alive, unleashes a pack of monstrous reptilian muttations to hunt her down. In the ensuing battle, Officer Jackson (Michelle Forbes), Castor (Wes Chatham), and Homes (Omid Abtahi) are killed. As the squad attempts to flee the sewers, a mutt grabs Finnick as he covers their retreat, forcing Katniss to use the Holo's self-destruct to end his suffering and destroy the remaining mutts. They are attacked by Peacekeepers after reaching the underground railways, during which another pod kills Messalla (Evan Ross). The few survivors eventually reach the surface and Cressida (Natalie Dormer) leads them to a safehouse, where a former Hunger Games stylist, Tigris (Eugenie Bondurant), hides them in her basement. While they all mourn the loss of their squad, Katniss confesses that she lied about her orders to kill Snow, and as a result of her lie, the rest of the squad are dead. The squad reveal that they knew this all along, but played along because they trusted her. Peeta comforts Katniss, saying that if she kills Snow, she will avenge the deaths of everyone who has died because of him. That night, Gale and Peeta discuss their love triangle, with Gale stating he thinks Peeta has won her over, but Peeta thinks that Gale has. Gale eventually remarks that deciding which one she can't live without is Katniss's problem, and not theirs.

Snow announces that the rebels have penetrated deep into the Capitol and asks refugees to come to his mansion, offering them with food and shelter. With the pods deactivated to allow passage, Katniss and Gale disguise themselves and mingle with the refugees to gain access to Snow. Their covers are nearly blown when the rebels arrive and attack the Peacekeepers, killing many Capitol civilians. In the ensuing chaos, Gale is captured by the peacekeepers; Katniss marches towards Snow's mansion and finds Peacekeepers taking Capitol children to provide Snow with a human shield. As the rebels near the mansion, a hovercraft with Capitol insignias flies by and drop silver parachutes (similar to the ones used in the Hunger Games) into the crowd of children surrounding the mansion, which explode. Upon the explosion, a team of rebel medics attempt to help the injured, among whom is Katniss' sister, Prim (Willow Shields). Shocked to see her sister on the battlefield, Katniss heads towards her, but just as Prim sees her a second round of bombs go off, killing Prim and badly injuring Katniss.

Upon recovering, Katniss learns from Haymitch that the Capitol has been conquered by the rebels, and that Snow has been captured. Katniss confronts the imprisoned Snow, who claims that Coin masterminded the child-bombings in order to turn his remaining supporters against him; Coin has thus played both Snow and Katniss "for fools" because they were both too focused on destroying each other to see her endgame. When Katniss accuses him of lying, he calmly reminds her of their promise to always be truthful to each other. Suspicious, Katniss realizes that the bombs resembled a trap Gale and Beetee had been working on earlier. When she confronts him, Gale remorsefully confesses that it may have been his and apologizes for failing to protect her family; unable to fully forgive him, Katniss tells him goodbye.

Later, Katniss attends a meeting with Coin (who has appointed herself interim President of Panem) and the other surviving Hunger Games victors- Peeta, Haymitch, Enobaria, Annie, Beetee and Johanna. Coin proposes having one final edition of the Hunger Games with the children of the Capitol as retribution for the previous games, as an alternative to exterminating most of the Capitol's population as war criminals. Beetee, Annie and Peeta vote no, while Johanna and Enobaria vote yes. Realizing that Snow was right about Coin's ambitions and ruthlessness, Katniss votes in favor of the motion "for Prim," which gains Coin's trust; Haymitch follows her lead. She is awarded the opportunity to execute Snow.

At the execution, which is being held before the whole of Panem, Katniss faces Snow once again. As she readies her bow, the two make eye contact, and Snow gives her one last smile. Katniss silently agrees, and instead shoots the arrow into Coin's heart, killing her. While a laughing Snow is lynched by an angry mob, Katniss attempts to commit suicide by consuming a nightlock pill, given to them earlier in case of enemy capture, but Peeta stops her attempt. Although initially imprisoned, Katniss is pardoned for her crime (being deemed mentally unwell) and through a letter delivered by Haymitch (Woody Harrelson), Plutarch Heavensbee (Philip Seymour Hoffman) advises Katniss to return to District 12 until things settle down.

Katniss returns to her home in the ruins of Victor's Village to recover from her traumatic ordeal, where she is eventually joined by Peeta, who has fully recovered his memories and his love for Katniss. After an initial period of depression, Katniss is eventually able to release her grief over Prim's death. Commander Paylor is elected the new President of Panem, and Katniss, Peeta, and Haymitch bond over their shared trauma. They learn that Gale has become a military commander in District Two, and Annie has given birth to Finnick's son. Katniss and Peeta slowly grow back together, and Katniss eventually admits her love for him.

Years later, Katniss and Peeta are shown to have two children. As Katniss' infant child wakes up from a nightmare she reminisces about her own recurring nightmares she still suffers from and explains she plays "a game" where she lists all the good things she has seen someone do. She notes that while the game has grown tedious over the years, "there are much worse games to play", as she smiles into the camera before the screen cuts to black.

Retrieved from "https://movies.fandom.com/wiki/The_Hunger_Games:_Mockingjay_–_Part_2?oldid=187116"
Community content is available under CC-BY-SA unless otherwise noted.