Edit
watch 01:23
Wiki Targeted (Entertainment)
Do you like this video?
Play Sound
The Hungover Games 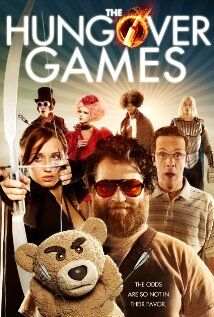 The Hungover Games is a 2014 parody film directed by Josh Stolberg. The cast of the film consists of Ross Nathan, Ben Begley, Herbert Russell, Rita Volk, and Jamie Kennedy.

The film was released on February 18, 2014 by Sony Pictures Home Entertainment.

Four friends are heading out for a bachelor party for their friend Doug, who is marrying a man named Tracey. They decide to have a quiet, subdued night at a small hotel in Laughlin, Nevada. They put their friend Zach in a straitjacket and cone to ensure he does not drug them and they drink non-alcoholic beer.

When they wake up the next morning they find they are in a strange room littered with party and sex toys and realize that Doug is, again, missing. A woman named "Effing" walks in and Zach recognizes her as a remake of Effie Trinket. When Ed attempts to leave he opens the door only to realize they are on a train and Zach realizes they are in the Hunger Games or, as Effing calls it, the "Hungover Games," a fight to the death in an arena between various Hollywood districts such as the Superhero District, the Middle Earth District, the Puppet District, the Johnny Depp District, and the Gratuitous Nudity District. The three watch a video on Zach's phone and realize that Doug and the trio volunteered as tribute the previous night in their drunken state. The three then realize they will have to fight in the games to find Doug and get him back to his wedding in time.

At the training center the three become acquainted with other tributes and the heavily favored "career" tributes, including Thor “Tonto” Odinson (with overt homosexuality), Carrie “Scary” White (with psychotic disorders), Theodore “Teddy” Clubberlang (with anatomical correctness), a Topless Girl (played by Sophie Dee), and her Topless Girlfriend (played by Kayden Kross). Ed meets Katnip Everlean, a girl he met the previous night while drunk and who likes him. Soon training ends and they are sent to rooms where they will ascend into the arena. While searching the rooms they see a man ascending into the arena but cannot see his face and are forced to leave after Zach spills bubble tea on the room's electronic controls.

The games begin and the tributes begin murdering each other. Zach becomes separated from Ed and Bradley. The two flee and spend the night in a tree to sleep but witness the careers murder two other tributes. They see Zach with the Careers and realize that Zach has allied with them to help them find and kill Ed and Bradley. In the morning Bradley is urged by another tribute, Little Boo, to drop a hive of "Swaggerjacks" (wasps) onto the careers sleeping below them. In the process Bradley and Ed are stung several times and the hallucinogenic venom causes them to pass out. They awaken and find Zach has nursed them back to health and they go search for Doug again.

Zach reveals that the reason they are in the Hungover Games is because the previous night he plugged in air-fresheners that were "midnight berry" scented and that the scent of the poisonous berries drugged them. He also reveals that the air-fresheners "may cause transportation to futuristic dystopia." Enraged, Ed and Bradley leave Zach who is later seduced by a female Avatar. He is ambushed by the careers but is saved by Katnip and Boo, who has slain the Gratuitous Nudity duo who were in the middle of kissing and groping each other in a jacuzzi, though the female Avatar is also murdered.

Meanwhile, Ed and Bradley decide to reunite with Zach after a rule change that states that four men who share a "bromance" can all win together. Ed and Bradley find Zach, Katnip and Boo and remember that Boo may know where Doug is. Before she can say, she is killed by Thor, who is murdered by Ed in retaliation. After a short funeral for Boo, Katnip decides to leave on her own to kill Tonto.

The three decide to head back to the Pornucopia after an announcement that something everyone is looking for is located there. Assuming it is Doug, the three rush to the Pornucopia but are attacked by Carrie. Zach murders Carrie in a rage. Ted and the other two puppets attack the three but Zach is able to blow up two of them using his Hunger Games's book and Katnip returns and saves Ed from Ted. She reveals she was mortally wounded in her fight with Tonto and dies with Ed beside her.

The three realize that their prize at the Pornucopia is a cell phone, and not Doug, and they realize they will never find him so they call Tracey to inform him of the situation. However, after a short conversation with Zach, Ed realizes where Doug is and stops Bradley from making the call. Ed explains that Doug's tube never came up because Zach's bubble tea short-circuited the tube that sends up tributes. After looking in his tube they realize Doug isn't there, but Doug emerges from the forest, camouflaged, and attacks them, berating them about how they always forget him and how he is almost never in the movies. The three tell him they will never forget him again and that he will have more lines in the next film, and he decides to spare them.

Another rule change states that there can only be one victor and the four turn on each other. Zach proposes they all eat poisonous berries, as the creators of the games would never let them all die as they would rather have four victors than none, and so would interrupt the four before they can eat the poison. Zach's plan fails after they eat the berries and die with no one stopping them. They wake up in their hotel room, realizing it was just a shared dream. The four go to the wedding where Ed laments about Katnip but runs into an identical looking girl who seems to be attracted to him.