View src
watch 01:33
Wiki Targeted (Entertainment)
Do you like this video?
Play Sound
The Hunt 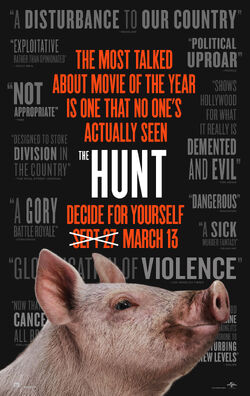 The film was scheduled to be released in the United States on September 27, 2019 by Universal Pictures. On August 10, 2019, it was reported that the movie would not be released.[1]

During the weekend of August 3, 2019 after people were killed or wounded in an attack at a store in El Paso, TX and another shooting just over a half day later in Dayton, OH, ESPN pulled an ad for the movie that they had previously cleared for broadcast. However, AMC still broadcast an ad for the movie during the season premiere of The Preacher. Universal Pictures announced they would be re-evaluating the marketing of the movie and removed some broadcast and online advertisements.[2]

Following messages by U.S. President Donald Trump on August 9th where he did not specifically name The Hunt but described a film to be released as being made "in order to inflame and cause chaos"[3], Universal decided to cancel the release of the film.[1]. Even before the decision, the film drew criticism due to the timing of the film's then-upcoming release and the deaths of people in recent mass shootings.[4]