$32.5 million[1][2]
The Hurricane Heist is a 2018 American disaster heist action film directed by Rob Cohen, written by Jeff Dixon and Scott Windhauser, and starring Toby Kebbell, Maggie Grace, Ryan Kwanten, Ralph Ineson, Melissa Bolona, James Cutler, and Ben Cross. It was released in the UK as a Sky Cinema Original Film. The film is about a maintenance worker, his meteorologist brother, and a treasury agent contending with band of rogue treasury agents who plan to use a Category 5 hurricane to cover their tracks of a bank robbery. The film was released on March 9, 2018, received negative reviews and was a box-office bomb, making just $32 million against its estimated $35 million budget.

In 1992, a category 5 hurricane named "Andrew" hits the town of Gulfport. Will and Breeze Rutledge (Leonardo Dickens and Patrick McAuley) are evacuating from the destructive hurricane with their dad. However, their truck gets stuck after avoiding the toppling tree in front of them, and they are forced to take refuge in a nearby house. While trying to save the truck from blowing away, strong winds blow a water tank and it crushes their dad, killing him.

In 2018, another destructive category 5 hurricane named "Tammy" approaches the town of Gulfport. Federal Reserve Treasury agent Casey Corbyn (Maggie Grace) is ordered by fellow employee Randy Moreno (Christian Contreras) to summon Breeze (Ryan Kwanten), who now works in maintenance and whose brother Will (Toby Kebbell) is a National Weather Service meteorologist, to fix the generator at a cash storage facility.

While she is out of the facility, rogue Treasury agents led by Connor Perkins (Ralph Ineson) infiltrate the facility and hold Moreno hostage. Their plan is to steal $600 million, and Perkins enlists computer hackers Sasha (Melissa Bolona) and Frears (Ed Birch) to crack the code of the vault. Failing to decrypt it, Perkins realizes that Corbyn may have changed it, so he has his men find her. Sasha and Frears have to use a brute-force attack using the town's transmission tower.

As Corbyn and Breeze drive back to the facility, they encounter the mercenaries, and Corbyn engages in a shootout with them. Will helps her escape with his Storm Research Vehicle (SRV) called the Dominator, but Breeze is left behind and is captured and taken hostage, forced to repair the generator.

Will is upset when he learns that his brother is in danger. Determined to save him, he and Corbyn meet Sheriff Jimmy Dixon (Ben Cross) at his station. Unfortunately, Sheriff Dixon reveals himself to be one of Perkins' cohorts and tries to take Will and Corbyn hostage. Corbyn shoots the sheriff, and they escape. When Dixon and one of his deputies chase them, Will manages to knock their car with his Dominator. Realizing that the tower is being used to crack the vault's code, Will and Corbyn manage to topple it moments before the decryption is completed. Perkins' men spot them and engage in a gunfight with them, but they escape. Dixon turns Perkins down, confronting him over a botched heist in the previous hurricane. When Dixon wants to claim all the money, Perkins shoots him dead and persuades Dixon's men to find Corbyn.

While looting a mall, Corbyn calls Perkins and makes a deal for the release of Moreno and Breeze as long as she opens the vault and gets the money. When Perkins asks where the trade will be conducted, Corbyn tells him at the mall. When Perkins asks ".....which mall?" Corbyn says "The only mall in Gulfport." The mercenaries arrive at the mall with Breeze to do the trade. Will and Corbyn make a plan to shoot the roof glass causing the mercenaries to be sucked out through the roof. After Will talks to Breeze, Corbyn shoots the glass roof, sucking the mercenaries out into the storm as planned. Corbyn, Will, and Breeze manage to hold on. After the storm surge, Corbyn gives herself up while Breeze rescues the stranded Will. Back at the Treasury facility as Corbyn and the remaining mercenaries arrive, Perkins breaks his deal to release Moreno and shoots him avenging the deaths of his men Jaqi (Moyo Akande) and Xander (Jimmy Walker).

As the eye of the storm passes, Perkins and his men take the money, using three of the facility's truck trailers, along with Corbyn. Will and Breeze follow them. With the eye-wall approaching on their tail, Will and Breeze take over a truck, and Frears and Perkins are injured in the process. After the struggle with Perkins, the eye-wall sucks the money out of one of the trucks and then the truck itself. Cursing the storm, Perkins is then killed after his own detached trailer crushes him. When Breeze's truck engine backfires and burns, Will and Corbyn transfer him to their truck. However, when they attempt to rescue Sasha and Frears, they are sucked into the storm.

Corbyn and the brothers manage to outrun the storm safely, and drive away into the sunshine.

Principal photography on the film began in Bulgaria on August 29, 2016.[7] In July 2017, the completed film, now titled The Hurricane Heist, was acquired for domestic distribution by Entertainment Studios with an early 2018 release date slated.[8]

In the UK, the film will be released by Altitude Film Distribution and will be the second Sky Cinema Original Film.

The Hurricane Heist grossed $6.1 million in the United States and Canada, and $26.4 million in other territories, for a worldwide total $32.5 million against a production budget of $35 million.[1]

In the United States and Canada, The Hurricane Heist was released on March 9, 2018 alongside The Strangers: Prey at Night, Gringo, and A Wrinkle in Time, and was initially projected to gross around $7 million from 2,402 theaters in its opening weekend.[9] However, after making just $950,000 on its first day, weekend estimates were lowered to $3 million. It ended up grossing $3 million, finishing ninth.[10]

On review aggregator website Rotten Tomatoes, the film holds an approval rating of 47% based on 59 reviews, and an average rating of 4.83/10. The website's critical consensus reads, "The Hurricane Heist is a throwback to the overblown action thrillers of yesteryear—and a thoroughly middling example of why they don't make 'em like this anymore."[11] On Metacritic, the film has a weighted average score of 35 out of 100, based on 12 critics, indicating "generally unfavorable reviews".[12] Audiences polled by CinemaScore gave the film an average grade of "B–" on an A+ to F scale.[10]

Alonso Duralde of TheWrap criticized the film's direction, acting and overbearing musical score, saying, "Critics often lament that worthy films released early in the year are too often forgotten during awards season, so let's be very clear up front: For your Best of the Worst of 2018 consideration, in all categories, The Hurricane Heist."[13] Andrew Barker, writing for Variety, gave the film an ironic recommendation, calling it the best worst movie of 2018 and saying: "All three of our heroes take time out in the middle of survival situations to discuss their undying love of football and the Second Amendment, but they also believe in climate change. If our divided country can't come together over a movie this wonderfully terrible, what hope do we really have?"[14]

There are some factual inconsistencies relating to the alleged location of the events in the film. Several scenes show mountains in the distance, but the entire Gulf Coast is completely flat. Also, the film claims to be in Gulfport, which exists in Mississippi, not Alabama. 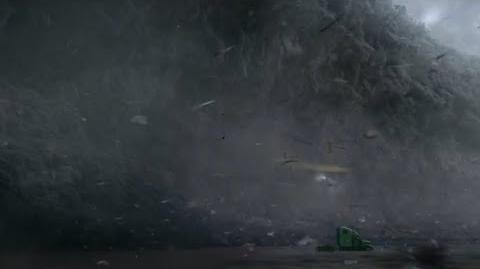 Retrieved from "https://movies.fandom.com/wiki/The_Hurricane_Heist?oldid=267923"
Community content is available under CC-BY-SA unless otherwise noted.