Start a Wiki
watch 01:27
The Loop (Movies)
Do you like this video?
The Iceman 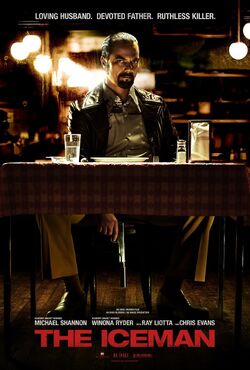 The Iceman is a drama thriller film based on the life of notorious Mafia hitman Richard Kuklinski. It was showan at the 2012 Venice Film Festival, the 2012 Toronto International Film Festival and the 2012 Telluride Film Festival.

The true story of mafia hitman, Richard Kuklinski: loving husband, devoted father, ruthless killer. He is believed to have killed more than 250 people between 1954 and 1985.

Retrieved from "https://movies.fandom.com/wiki/The_Iceman?oldid=160731"
Community content is available under CC-BY-SA unless otherwise noted.