View src
watch 01:33
House of the Dragon Trailer - The Loop
Do you like this video?
Play Sound
The Imitation Game 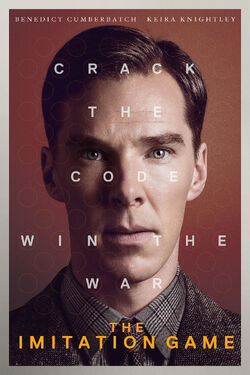 The Imitation Game is a 2014 historical thriller film about British mathematician, logician, cryptanalyst and pioneering computer scientist Alan Turing who was a key figure in cracking Nazi Germany's naval Enigma code which helped the Allies win the Second World War, only to later be criminally prosecuted for his homosexuality. The film stars Benedict Cumberbatch as Alan Turing, and is directed by Morten Tyldum, with a screenplay by Graham Moore based on the biography Alan Turing: The Enigma by Andrew Hodges.

The film's screenplay topped the annual Black List for best unproduced Hollywood scripts in 2011. After a bidding process against five other studios, The Weinstein Company acquired the film for $7 million in February 2014, the highest amount ever paid for US distribution rights at the European Film Market. It had its world premiere at the 41st Telluride Film Festival in August 2014. It also featured at the 39th Toronto International Film Festival in September where it won "People's Choice Award for Best Film", the highest award of the festival. It had its European premiere as the opening film of the 58th BFI London Film Festival in October and was released theatrically in the United Kingdom on 14 November, and in the United States on 28 November.

In terms of historical accuracy, while the broad outline of Turing's life as depicted in the film is true, a number of historians have noted that elements within it represent distortions of what actually happened, especially in terms of Turing's work at Bletchley Park during the war and his relationship with friend and fellow code breaker Joan Clarke.

The Imitation Game was both a critical and commercial success. The film was included in both the National Board of Review's and American Film Institute's "Top 10 Films of 2014". At the 87th Academy Awards, it has been nominated in eight categories including Best Picture, Best Director for Tyldum, Best Actor for Cumberbatch and Best Supporting Actress for Keira Knightley. It also garnered five nominations in the 72nd Golden Globe Awards and was nominated in three categories at the 21st Screen Actors Guild Awards including Outstanding Performance by a Cast in a Motion Picture. In addition, it received nine British Academy of Film and Television Arts nominations including Best Film and Outstanding British Film. Its cast and crew were honoured by LGBT civil rights advocacy and political lobbying organisation Human Rights Campaign for bringing Turing's legacy to a wider audience. As of January 2015, the film has grossed a total of $118.9 million worldwide against a $14 million production budget making it the top-grossing independent film release of 2014.

In 1951 two policemen, Nock and Staehl, investigate the mathematician Alan Turing after an apparent break-in at his home. During his interrogation by Nock, Turing tells of his time working at Bletchley Park.

In 1927 the young Turing is unhappy and bullied at boarding school. He develops a friendship with Christopher Morcom, who sparks his interest in cryptography, and develops romantic feelings for him. Before Turing can confess his love, Christopher dies unexpectedly from tuberculosis.

When Britain declares war on Germany in 1939, Turing travels to Bletchley Park, where, under the direction of Commander Alastair Denniston, he joins the cryptography team of Hugh Alexander, John Cairncross, Peter Hilton, Keith Furman, and Charles Richards. The team are trying to decrypt the Enigma machine, which the Nazis use to send coded messages.

Turing is difficult to work with and considers his colleagues inferior; he works alone to design a machine to decipher Enigma. After Denniston refuses to fund construction of the machine, Turing writes to Prime Minister Winston Churchill, who puts him in charge of the team and funds the machine. Turing fires Furman and Richards and places a difficult crossword in newspapers to find replacements. Joan Clarke, a Cambridge graduate, surpasses Turing’s test, but her parents will not allow her to work with the male cryptographers. Turing arranges for her to live and work with the female clerks who intercept the messages and shares his plans with her.

Turing’s machine, which he names Christopher, is constructed but cannot determine the Enigma settings before the Germans reset the Enigma encryption each day. Denniston orders it destroyed and Turing fired, but the other cryptographers threaten to leave if he goes. After Clarke plans to leave on the wishes of her parents, Turing proposes marriage, which she accepts. During their reception, Turing confirms his homosexuality to Cairncross, who warns him to keep it secret. After overhearing a conversation with a clerk about messages she receives, Turing has an epiphany, realising he can program the machine to decode words he already knows exist in certain messages. After he recalibrates the machine, it quickly decodes a message and the cryptographers celebrate; however, Turing realises they cannot act on every decoded message or the Germans will realise Enigma has been broken.

Turing discovers that Cairncross is a Soviet spy. When Turing confronts him, Cairncross argues that the Soviets are allies working for the same goals and threatens to disclose Turing’s homosexuality if his role as an agent is revealed. When the MI6 agent Stewart Menzies appears to threaten Clarke, Turing reveals that Cairncross is a spy. Menzies reveals that he knew this already and planted Cairncross among them in order to leak messages to the Soviets for British benefit. Fearing for her safety, Turing tells Clarke to leave Bletchley Park, revealing that he is gay and lying about never having cared for her. After the war, Menzies tells the cryptographers to destroy their work and that they can never see one another again or share what they have done.

In the 1950s Turing is convicted of indecency and, in lieu of a jail sentence, undergoes chemical castration so he can continue his work. Clarke visits him in his home and witnesses his physical and mental deterioration. She reminds him that his work saved lives and uses the phrase Christopher used of Turing and Turing once used of her: "Sometimes it is the people no one imagines anything of who do the things that no one can imagine." He then commited suicide according to the movie.

The film has been met with critical acclaim, with critics particularly lauding Cumberbatch's lead performance as Turing. Rotten Tomatoes sampled 216 critics and judged 89% of the reviews positive with an average rating of 7.7/10. The site's critical consensus reads, "With an outstanding starring performance from Benedict Cumberbatch illuminating its fact-based story, The Imitation Game serves as an eminently well-made entry in the 'prestige biopic' genre." On Metacritic, the film has a score of 72 out of 100, based on 47 critics, indicating "generally favorable reviews". The film received a grade of "A+" from market-research firm CinemaScore and was included in both the National Board of Review's and American Film Institute's "Top 10 Films of 2014".