watch 00:59
The Loop (Movies)
Do you like this video?
The Incredible Hulk 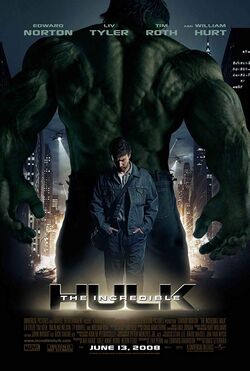 The Incredbile Hulk is a 2008 American superhero film based on the Marvel Comics character the Hulk. It is directed by Louis Leterrier and stars Edward Norton as Dr. Bruce Banner. It is the second film to be released in the Marvel Cinematic Universe. This film establishes a new backstory where Banner becomes the Hulk as an unwitting pawn in a military scheme to reinvigorate the supersoldier program through gamma radiation. On the run, he attempts to cure himself of the Hulk before he is captured by General Thaddeus "Thunderbolt" Ross (William Hurt), but his worst fears are realized when power-hungry soldier Emil Blonsky (Tim Roth) becomes a similar but more bestial creature. Liv Tyler also stars as Betty Ross, Banner's love interest and General Ross' daughter.

Marvel Studios reacquired the rights to the character after the mixed reception to the 2003 film Hulk, and writer Zak Penn began work on a loose sequel that would be much closer to the comics and the television series. Norton rewrote the script after he signed on to star, clarifying the film's new backstory. Leterrier redesigned Roth's character, called the Abomination in the comics, from the comics' reptilian humanoid into a monster with bony protrusions. Filming mostly took place in Toronto, Ontario in 2007, where the production attempted to be environmentally friendly.

The film was No. 1 at its box office release—out grossing its predecessor—grossing over $260 million in worldwide, as well as No. 1 for the DVD release. Norton was initially intended to again portray Bruce Banner in The Avengers and other future installments featuring the character, but after talks broke down, he was replaced by Mark Ruffalo, who has signed on to reprise the role in all future sequels. However, despite the positive reception towards Ruffalo's portrayal of the character in The Avengers, Marvel chose to put off a possible sequel until at least 2016.

At Culver University in Virginia, General Thaddeus "Thunderbolt" Ross (William Hurt) meets with Dr. Bruce Banner (Edward Norton), the colleague and lover of his daughter Betty (Liv Tyler), regarding an experiment that is meant, Ross claims, to make humans immune to gamma radiation. The experiment—part of a World War II era "super soldier" program that Ross hopes to recreate—fails and the exposure to gamma radiation causes Banner to transform into the hulk for brief periods of time, whenever his heart rate rises above 200 beats per minute. The Hulk destroys the lab and injures Betty. Banner becomes a fugitive from the U.S. military and Ross in particular, who wants to weaponize the Hulk process.

Five months later, Banner works at a bottling factory in Rocinha, Rio de Janeiro, while searching for a cure for his condition. On the Internet, he collaborates with a colleague he knows only as "Mr. Blue", and to whom he is "Mr. Green". He is also learning meditative breathing techniques from a martial arts expert (Rickson Gracie) to help keep control, and has not transformed in 5 months, 158 days. After Banner cuts his finger, a drop of his blood falls into a bottle, and is eventually ingested by a consumer (Stan Lee) in Milwaukee, Wisconsin, giving Banner gamma sickness. Using the bottle to discover Banner's location, Ross sends a team, led by Russian-born British Royal Marine Emil Blonsky (Tim Roth) to capture him. Banner transforms into the Hulk and defeats Blonsky's team. After Ross explains how Banner became the Hulk, Blonsky agrees to be injected with a small amount of a serum developed as part of the same operation, which gives him enhanced speed, strength, agility and healing, but also begins to deform his skeleton and impair his judgment.

Banner returns to Culver University and reunites with Betty, who is dating psychiatrist Leonard Samson (Ty Burrell). Banner is attacked by Ross and Blonsky's forces, tipped off by the suspicious Samson, causing his transformation into the Hulk. The ensuing battle proves to be futile for Ross' forces and they eventually retreat. But Blonsky, whose sanity is starting to falter, boldly attacks and mocks the Hulk. The Hulk dispatches Blonsky and flees with Betty. After the Hulk reverts to Banner, he and Betty go on the run. Banner contacts Mr. Blue, who urges them to meet him in New York City. He turns out to be cellular biologist Dr. Samuel Sterns (Tim Blake Nelson), who tells Banner he has developed a possible antidote to Banner's condition. After a successful test, he warns Banner that the antidote may only reverse each individual transformation. Sterns reveals he has synthesized Banner's blood samples, which Banner sent from Brazil, into a large supply, with the intention of applying its "limitless potential" to medicine. Fearful of the Hulk's power falling into the military's hands, Banner attempts to convince Sterns to destroy the blood supply. Blosnky is reveled to have survived his injuries from the previous battle and has completely healed. He joins Ross' forces for a third attempt take Banner into custody. They succeed and Banner, along with Betty, are taken away in Ross' helicopter.

Blonsky stays behind and forces Sterns to inject him with Banner's blood, as he covets the Hulk's power. Sterns warns that the combination of the super-soldier formula and Banner's blood may cause him to become an "abomination". Unconcerned, Blonsky forces Sterns to administer the blood and a gamma charge. The experiment mutates Blonsky into a creature with size and strength surpassing that of the Hulk, but drives him into complete insanity. Abomination then attacks Sterns, who gets some of Banner's blood into a cut on his forehead causing it to mutate him. Abomination then rampages through Harlem. Unlike Hulk, Abomination cannot revert back to normal Blonsky state.

Realizing that the Hulk is the only one who can stop Abomination, Banner convinces Ross to release him. He jumps from Ross' helicopter and transforms after hitting the ground. After a long and brutal battle through Harlem, the Hulk defeats and nearly kills Abomination by choking him with a huge chain, relenting only after Betty's plea to spare him. After having a small, peaceful moment with Betty, the Hulk flees from the scene, and escapes from New York.

A month later, Banner is in Bella Coola, British Columbia. Instead of trying to suppress his transformation, he is attempting to transform in a controlled manner. As his eyes turn green, a grin appears on his face.

In a local bar, General Ross is approached by Tony Stark (Robert Downey, Jr.), who reveals that a "team" is being formed.

The Incredible Hulk received mostly favorable reviews from critics. On Rotten Tomatoes, The film has a score of 67% based on 231 reviews with an average score of 6.17/10.

Retrieved from "https://movies.fandom.com/wiki/The_Incredible_Hulk?oldid=215742"
Community content is available under CC-BY-SA unless otherwise noted.